I-Team: How dangerous is football for teens? 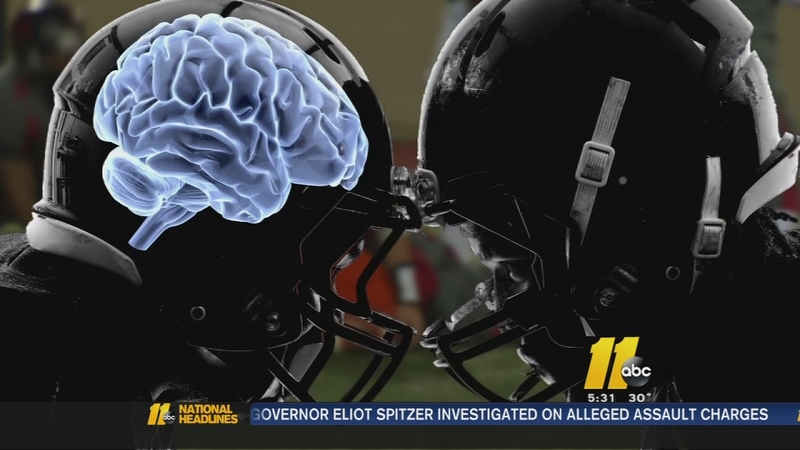 RALEIGH (WTVD) -- Friday night football brings together families for intense rivalries in cities and towns across the heart of Carolina. But, for one father, the sport is bittersweet.

"He loved football," said Bob Gfeller whose son, Matt, met tragedy under the Friday night lights. "He was a great kid. He had a lot going for him."

Bob Gfeller lost his son, a high school linebacker, to a helmet-to-helmet hit.

"What happened to Matt is his brain moved so much in his skull that it sheared and bled, " explained Gfeller. "He had severe brain damage and so he never woke up."

Instead of turning his back on football, Bob is moving forward to make the game safer.

"Matt would leave every huddle after they called the play by turning to his teammates and say 'I won't let you down.' Well, if we had just turned our back on football and dug ourselves into a hole, we would have let Matt down," said Gfeller.

How a concussion happens

A concussion is a traumatic brain injury that causes your brain to move around in your head and changes the way your brain functions. It's caused by a violent blow to the head or neck.

Repeated concussions can cause CTE or chronic traumatic encephalopathy, a brain disease found in some NFL players.

But now, a new study is raising concern about high school football players. Researchers at Boston University found CTE in the brain of a 25-year-old man who played high school and limited college football.

"When you see this disease in a person that young, it's surprising, even shocking," said Dr. Ann McKee, the study's author. She says the findings show you don't have to be a professional athlete to develop the disease.

Lewis Margolies is a pediatrician and UNC professor who thinks high school students should not play the game until the impact on them is studied. He often demonstrates outside UNC games to educate the public.

Dr. Josh Bloom, who practices sports medicine in Cary, is concerned about blows to the head that are less serious than a concussion and don't have symptoms.

"What we are finding are those are worrisome as well and there might be some cumulative effects with that," explained the orthopedic physician. "We don't know the long term impact."

Will Grena is a senior at Cary High School where he played on the offensive line. He had a concussion that benched him for nearly four weeks. He followed the protocol and went straight to the team athletic trainer.

"I went over to him and he performed the basic tests on the sideline, and he came to the conclusion that there was something at least wrong with me, the senior remembered. "He diagnosed me with a concussion."

After his injury, Will has advice for his teammates who want to stay in the game after a severe hit.

"If it's a mild concussion some of them just ignore it, and I look at these guys and I'm like 'That's not a good idea. You need to go see the athletic trainer,'" he said.

Will's dad, Gary, feels despite the risk, he doesn't think football is a dangerous sport.

"It's really not a concern for me," he exclaimed. "We can't wrap our sons in bubble wrap and worry about them every moment."

The head coach at Northern High in Durham tackles safety all season.

"Part of the game plan each and every week is to teach safety," advised Raymond Wilson. "So, every day you teach safety in the drills that you do and your practice setting, your tackling drills, you're always teaching safety."

"He makes the snap but now he immediately comes up and that first point of contact is with his hands. His helmet is in the chest not in the opponent's helmet and the important thing is the helmet is not the first point of contact," Mihalik said as he pointed to the video. "We really want them to get their head out of the play."

The center also monitors players by putting sensors in their helmet measuring the timing and force of impact.

"Anytime there's an impact that comes in, it transmits in real time to the sideline," Milhalik explained.

Bob Gfeller helped pass a law he hopes is making players safer on high school football fields. It is called the Gfeller-Waller Act named for his son and another high school player who died the same year. It sets protocols for coaches, students, and athletic trainers when a player has a head injury and keeps players off the field until they're cleared by a doctor or athletic trainer.

If parents want to know how many concussions happen on their child's team, they should ask the athletic director. They're supposed to be tracking it.