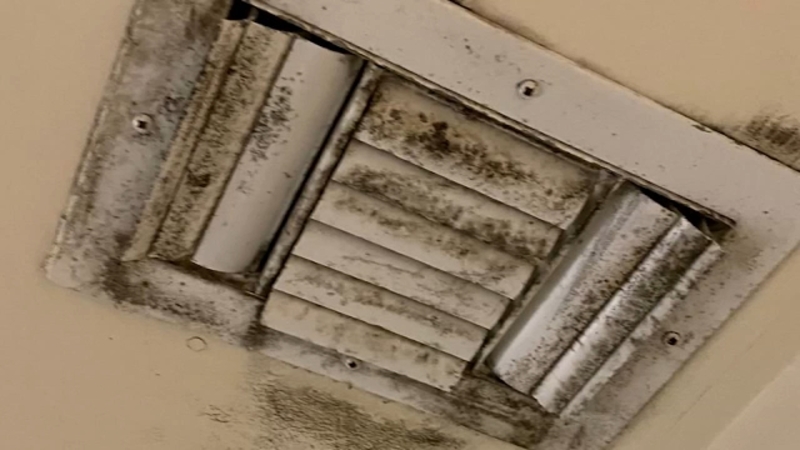 FORT BRAGG, N.C. (WTVD) -- It wasn't quite the homecoming one Fort Bragg soldier was expecting.

Returning from Afghanistan to find a room full of mold. Not the homecoming one Ft. Bragg solider was hoping for. Tonight on @ABC11_WTVD we speak exclusively to his father about the living conditions in the barracks. pic.twitter.com/2Wpw9Yvza1

The father said his son was in Afghanistan for around two months before he returned to Fort Bragg barracks earlier this week. He said mold covered the room, clothes and bedding.

"So they just had to throw away their stuff," he said. "Clothes they bought and they couldn't save it."

The father also said his son had to stay at a hotel room due to the room's conditions and spent money on an air purifier.

"These are the guys going out there. First ones in, last ones out anywhere they go, no questions asked. And then they come home to this and it's just bumming and...he says he'd rather be out in Afghanistan, it was nicer in Afghanistan than living here and it sucks to think that way," the father said.

He said this isn't the first time they've experienced issues with mold but this is the worst. The father said while the mold has been cleaned in the past, he claims the issue has never really been addressed.

"You can only take so much, you can only go so far with it. You make the phone calls, you try to resolve it to get the attention of somebody but obviously, it's not getting done," the man said.

He said he is most concerned for his son's health.

"Even speaking with him today, he was wearing a mask and was just feeling like crap and having breathing issues and was sick and he was only in the room for an hour," the father said.

Col. Scott Pence, Fort Bragg Garrison commander, said the safety and welfare of the soldiers and their families are a top priority, especially when they return from deployment.

"Mitigating mold risk is part of life on Fort Bragg. When we receive work orders for mold conditions, we take action and remediate as quickly as possible. We personally conduct walkthroughs in the barracks to ensure quality of life," Pence said in a written statement.

Pence said those walkthroughs are conducted before soldiers return as well.

A spokesperson for Fort Bragg said there was not a work order for the mold in this soldier's room on record. Once ABC11 reached out, officials searched the barracks and did find a room with mold conditions and are taking steps to fix the situation.

"We don't know if there's a concern if they are not reported. For that reason, we encourage soldiers to submit a demand work order request, so we can quickly provide remediation," a spokesperson wrote.

Since January, three of the 40 work orders in the barracks were related to mold, according to an Fort Bragg spokesperson.

ABC11 has investigated mold concerns on Fort Bragg in the past. In 2019 and 2020, a few families reported mold issues at their on-post housing. Last September, Army Secretary Ryan McCarthy visited Fort Bragg and toured the houses. He pledged to keep on-post housing a top priority.