Is Chapel Hill's Franklin Street safe for walkers and bikers? Some say no 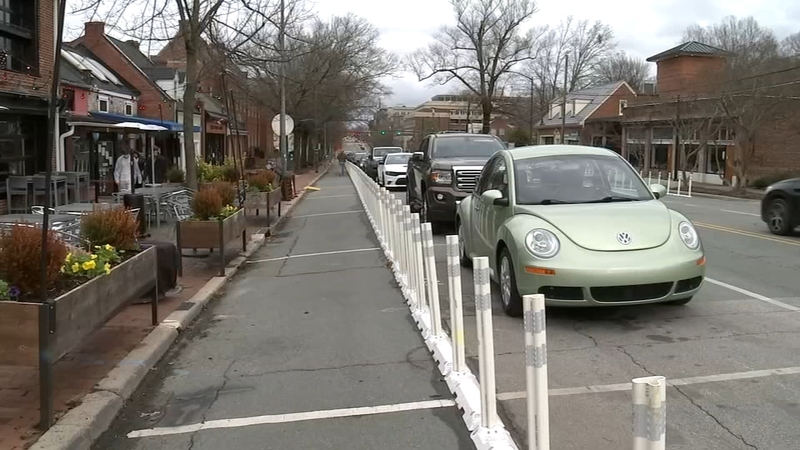 Is Chapel Hill's Franklin Street safe for walkers, bikers? Some say no

CHAPEL HILL, N.C. (WTVD) -- There are calls for action to make Franklin Street safer after a bicyclist was hit earlier in the week.

Nick Watson was on his bike going west near Graham Street when a driver of a parked car opened their door to get out.

The cyclist hit the open door and was thrown from his bike.

Watson is on life support at UNC Hospitals.

Chapel Hill mayor pro tem Karen Stegman said this week in a town council meeting that it is in a crisis when it comes to safety.

Last year, 16 people were hit trying to cross at designated crosswalks. Robert Poitras, longtime owner of Carolina Brewery on West Franklin Street, is hopeful the town addresses it as well as what to do with sidewalk dining.

As it stands, he said there's so much confusion about where bikes go and where people should walk. Currently there is a lane on the other side of his restaurant but it's not delineated as a bike lane.

Poitras, however, said he doesn't believe bike lanes on Franklin are the answer.

"We've got a bike lane on Rosemary, we have a bike lane the other way on Cameron," he said. "Franklin is a busy, fast street and people aren't used to bicyclists on this street. It's not identified as a bike lane."

Franklin Street is a state road and NCDOT is set to repave it during the summer. It was supposed to happen last summer but business owners were concerned about its negative impact. The Town said it believes the resurfacing and restriping will give it a chance to figure out how to do a makeover.

"I'm encouraged for this weekend," said Poitras, referring to the uptick he will see from the crowds coming to the Duke at UNC basketball game. "I'm concerned about the summer and what happens on Franklin Street. I spent $10,000 to expand my patio dining during the pandemic which was not easy to do."