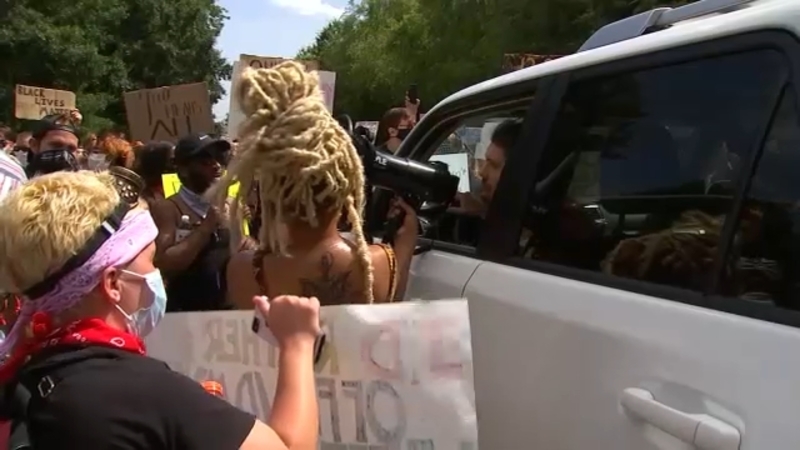 RALEIGH (WTVD) -- Sunday marked the 51st anniversary of a historic moment in the Gay Rights Movement launched by Black Trans women and other activists in 1969.

On Sunday, Alexandria Webb honored those trailblazers by using her voice to call attention to police brutality of transgender people of color.

"For myself, any experience that I've had with the police has been awful," Webb said.

The 27-year-old Black transgender woman from Raleigh joined a massive group through downtown Raleigh-- who at times blocked traffic-- as a symbol of the barriers and dangers LGBTQ people of color face every day.

I’m ready to introduce you to Alexandria Webb, a black trans woman from Raleigh. She marched today on the 51st Anniversary of the Gay Rights Movement calling attention to her struggles and how they intersect with #BlackLivesMatter and #BlackTransLivesMatter. Watch at 11p on ABC pic.twitter.com/6mmI4sLO0S

From housing to unemployment to violence.

"I'm afraid that I might get hurt because I'm bisexual," said Sam Pattey, a demonstrator at Sunday's rally.

In Webb's case, she says those barriers also include discrimination and hostility from law enforcement.

"I have had altercations where I was viewed as a man in a dress. So that automatically discredited anything that came out of my mouth because I am a deviant to society," Webb said. "It's really aggressive to have my life weaponized against me."

Transgender people of color are six times more likely to experience physical violence from the police compared to White cisgender survivors and victims, according to the National Coalition of Anti-violence Programs.

Police violence against the LGBTQ community dates back to June 28, 1969, when New York City police raided the Stonewall Inn, a gay club. Solicitation of same-sex relations was illegal at that time.

The chaos sparking a riot and several days of protest after patrons and employees were brutally arrested.

Drake Gomez and his boyfriend Kaleb joined Sunday's rally to lift up people like Webb.

"I'm a White-Mexican gay guy, so I'm doing pretty good. We're out here because Black people are being killed and we're trying to fight systemic racism and discrimination," Gomez said.

Heterosexual allies also marched with members of the LGBTQ+ community from Nash Square to Raleigh Police department to Moore Square.

"As a straight Black male, I think it's important that we do not exclude the LGBTQIA community from our community. Because they are our community," said Kerwin Pittman, a social justice activist from Raleigh.

Alexandria tells ABC11 she hopes Sunday's rally sends a powerful message to law enforcement and the broader community. "We obviously can't depend on the police to protect us. It's time for our community to protect us."

Demonstrators say they want the police defunded, demilitarized, and some even want it abolished.