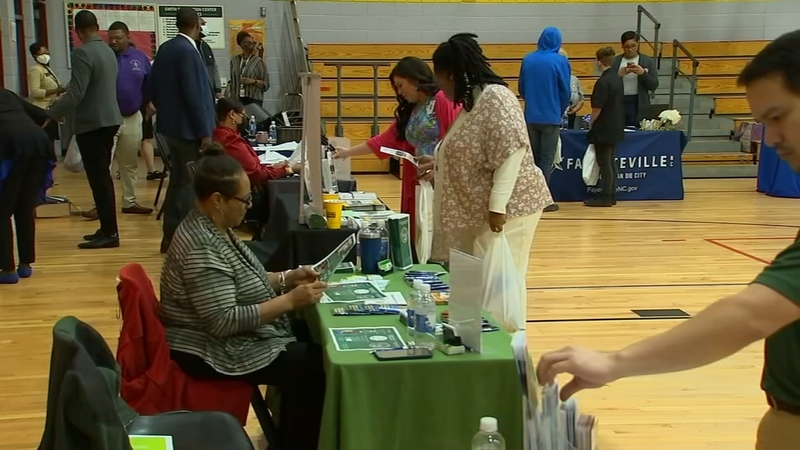 FAYETTEVILLE, N.C. (WTVD) -- Tuesday marked Equal Pay Day across the United States. Though the gender pay gap has been steadily decreasing for decades, female workers across the nation still make less than men.

In every state, women make less than men. North Carolina female workers make 82 cents for every dollar a man makes.

"Equality is addressing the system, the system right now, it's been oppressive for women. Yes, it's getting better, very slowly. But we have to really look at the variables of why it's hard for women," explained Fayetteville business owner Aida Algarin.

Algarin use to work in Corporate America where she had to actively work to overcome barriers.

"In the 10 years I worked in that field, I certainly learned a lot about having to advocate for pay to be able to make sure that my performance was being fairly compensated," she remembered.

When she moved to Fayetteville, she said the pay was just not enough so she got out of the industry.

Four years ago, she decided to open her own business, Central Carolina Doulas.

Her business employs and works primarily women and Algarin said she sees daily the impact the last few years have had on female workers.

"Women are actually encountering so many barriers to getting back into work. Even just taking maternity leave, it's hard to get back. You don't have daycare. So this is affecting women in the workplace right now. It's important for us to realize that the resources are not there, right now for women," Algarin said.

The gender pay gap remains a top issue as many female workers choose how to reenter the workforce following COVID-19.

"I've seen more women stepping out of their career to be at home because of schools being closed because of childcare," she said.

During the pandemic, the unemployment rate for women shot up to more than 16%. The latest nation numbers show that this has significantly declined to around 3.9%.

"I'm trying to elevate not just this industry, but other small businesses that are service-oriented like us to be able to, first of all, make sure compensation is not just good, but it exceeds, you know, the level of what is fair for those that work for me," she explained.

Beyond just increasing pay, female workers are hoping to expand representation across fields.

Luesena Carroll chairs the supply chain management program at Fayetteville Technical Community College. She joined other local businesses and programs to recruit potential workers on Tuesday during a career fair.

"Recently there has been a push to get more women, especially in trucking and in the trucking industry," Carroll explained. "They're even changing the truck to automatic to make it more women-friendly."

Carroll said the industry is booming and would benefit from adding more women workers.

"I think more women in our arena will help them smarten up a little bit," she said.

Carroll is a retired Marine and has been in male-dominated fields for most of her life. She said while she's had to fight against a few additional obstacles, the work has been rewarding.

"In my career, what I found is that once you get in the door and you prove yourself, you don't have the problem, it's just getting in the door," she said. "This is my personal experience. Other females might have had different ones but I'm a hard worker."

On Tuesday, President Joe Biden signed an executive order encouraging the government to consider banning federal contractors from seeking information about job applicants' prior salary history. The Labor Department is also working to assist with fighting against pay disparities.

Algarin said she believes some change can start locally. She encourages females to utilize resources in their community and not be afraid to start their own business if they are running into barriers in their usual industry.

"We've got to make an effort, both from the small businesses to the larger businesses, to bring women back into the workforce," she said. "It's a systemic issue that we've got to tackle but each of us have a role no matter where we are within the economy and within our community. We all can play a part in this."
Report a correction or typo
Related topics:
careersfayettevillepay raiseentrepreneurshipsmall businessjobs hiringcareersworkplacewomen
Copyright © 2022 WTVD-TV. All Rights Reserved.
TOP STORIES
Death toll rises to 21, mostly children, in TX school shooting
Triangle activists, law enforcement react to deadly Texas shooting
Southern Baptist Convention to release list of clergy sex abusers
Uvalde school shooting: What we know about 19 kids, teacher killed
Plans revealed for new development where circular Raleigh hotel stands
A look at some of the deadliest US school shootings
Entrepreneurial Fayetteville sisters honored with Key to the City
Show More
Camp Lejeune warns people of explosives-filled beach area
Canes fall 4-1 in New York; series tied at 2
Johnston Co. dad starts Facebook group to help families find formula
Biden says 'we have to act' after Texas school shooting
1 dead, brother still missing in Cape Fear River
More TOP STORIES News