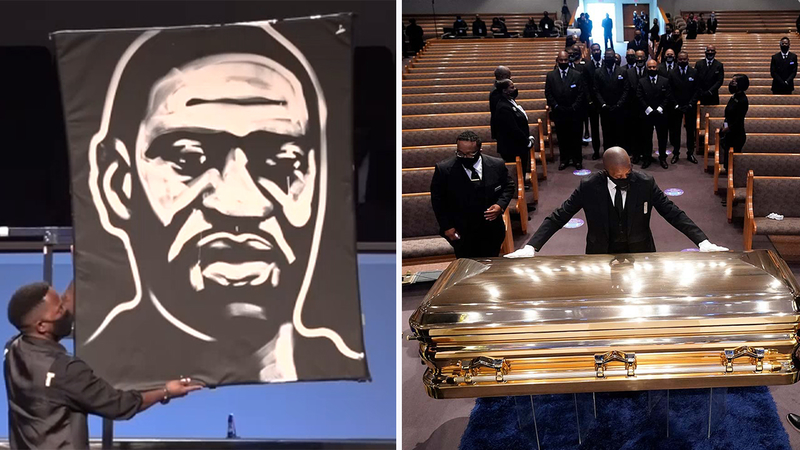 HOUSTON, Texas -- While tragedy surrounded George Floyd's death and the tense protests that resulted around the country, his funeral service in his hometown of Houston on Tuesday attempted a shift of celebration.

The service took place at The Fountain of Praise church, a place of worship that Floyd's family attended when he grew up, and one that had been closed due to the coronavirus pandemic.

While more than 6,300 people waited in long lines and in the heat to pay their respects at Monday's public visitation, only several hundred invited guests, some asked to wear white by the family, were allowed to attend what Pastor Remus E. Wright called "a celebration" of the 46-year-old.

Flowers and a picture of #GeorgeFloyd lay outside the Fountain of Praise church in SW #Houston. Floyd will be laid to rest today in a ceremony for family & invited guests. https://t.co/9jimVLu7od pic.twitter.com/DtvPgvCGh7

"In the tradition of the African American church, this will be a home-going celebration!" said co-pastor and Remus' wife, Mia K. Wright, as the service began.

The opening parts of the service included lively gospel performances, a live painting of a portrait of Floyd, and some words spoken about him by friends and family, which addressed the man as a devoted family member and a rising star athlete during his time in high school.

The service also featured a pre-recorded message by presidential candidate, former Vice President Joe Biden, who met in private with Floyd's family for more than an hour the day before.

Biden offered comfort to Floyd's family in the midst of grief.

"Unlike most, you must grieve in public. It's a burden. A burden that is now your purpose to change the world for the better, all in the name of George Floyd," Biden said, referring to the impact of Floyd's passing.

Biden also addressed Floyd's children, namely 6-year-old Gianna, whose declaration that "my dad changed the world" has been one of the most memorable moments in a time of tension.

"Little Gianna," said Biden. "You're so brave. Daddy is looking down and he's so proud of you."

Watch the video above to hear Joe Biden's remarks for George Floyd.

The widespread impact of Floyd's death, which was captured on cellphone video and played out everywhere, was indeed signified by the people who attended. Beyond friends, family and politicians from his hometown, notable figures spanning politics, sports and entertainment were among the 500 people who attended.

PHOTOS: Remembering George Floyd across Houston as he is laid to rest in his hometown

Ahead of the service, a partial list of invited guests was released, which included Houston Mayor Sylvester Turner, Rev. Al Sharpton, Attorney Benjamin Crump, Houston rappers Slim Thug and Paul Wall, and retired boxer Floyd Mayweather Jr., who is paying for the funeral services for Floyd.

See the lively moment in which Mayor Sylvester Turner paid tribute to George Floyd by committing to a major policy shift in HPD.

Since the service got underway, people including Houston Texans star J.J. Watt and actors Jamie Foxx and Channing Tatum were spotted in the congregation.

A procession got underway after the service in route to a private burial in suburban Pearland, just outside of Houston. After a funeral escort, Floyd's body was transferred from a hearse into a horse-drawn carriage for the last mile to his burial site, where he is being buried next to his mother.

Throughout the procession, crowds of people chanted Floyd's name, all in the name for racial equality.

The funeral concludes six days of memorials for Floyd that were held in Minneapolis, where he lived in recent years, and Raeford, North Carolina, near where he was born.