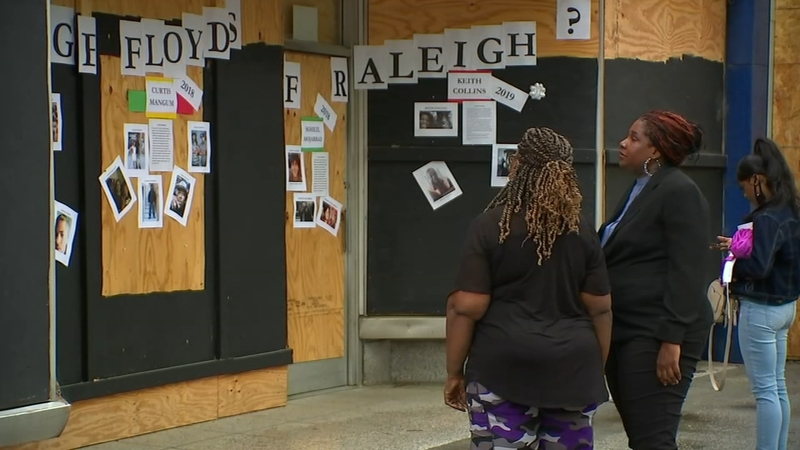 RALEIGH, N.C. (WTVD) -- The lives of men who've died at the hands of police in Raleigh are now on full display downtown.

A makeshift memorial was put up on Fayetteville Street by activists and family members who believe the men died because of police brutality and deserve as much attention as George Floyd.

Outside the old Kimbrell's Furniture, Betty Johnson arrived at the memorial as Monday evening's rain was clearing. Not long after, this Raleigh mother began wiping away her own tears.
"It's a remembrance," Johnson said. "Back to like it happened yesterday."

This unauthorized remembrance plastered on the plywood of this vacant store is titled: "Do You Know the George Floyds of Raleigh?" It has pictures and brief stories of seven men, all Black and brown, who died in Raleigh Police custody since 2013. Included are controversial cases like Johnson's son, Curtis Mangum.

Raleigh activists and family members installed this makeshift memorial on the outside of the old Kimbrell’s in downtown Raleigh — remembering the lives of men who’ve died in Raleigh police custody. #abc11 pic.twitter.com/HP2PpU7szc

Mangum was arrested by RPD late in the night on Jan. 10, 2018 in southeast Raleigh. He was dead at WakeMed a few hours later.

Mangum's family made the case that the officers had good reason to believe that the 32-year-old swallowed cocaine to conceal it from police before the car he was a passenger in was pulled over. The family insists the officers were more interested in making a drug arrest then getting Mangum immediate medical attention before it was too late.

The state medical examiner ruled the death an accident. Wake County prosecutors filed no charges against the officers. For Mangum's mother, it still stings.

"All the time. Every day," she said. And I believe he would be here today if they only carried him to the hospital."

“I’m glad they’re bringing it back out and hope we can get some justice.” pic.twitter.com/Rp0M1Jvy5r

"We always had George Floyds," said Muktarian, executive director of Save Our Sons. "But that didn't stop the deaths. And we need our mayor to be supportive of the young men who have died in her backyard."

George Floyd's murder in Minneapolis set off rounds of unrest in Raleigh and beyond. And after learning of Floyd's North Carolina roots, city leaders embraced a plan for a memorial center in his honor here. Muktarian is calling on them to do more.

"It is time now to ask our mayor, 'What do you plan to do? And will you address the systemic racism and death and police brutality in the city of Raleigh,'" Muktarian said.

Muktarian and her group were big backers of the city's creation last year of a police advisory board. But, they believe true community oversight will only come if the board has subpoena power to request police records and reports of grievances against officers.

Subpoena power for community oversight boards could only come from a change in North Carolina state statutes. Muktarian's group is pushing city leaders to lobby for that as well.