Despite calls for reform after George Floyd's death, no significant laws have been passed in NC 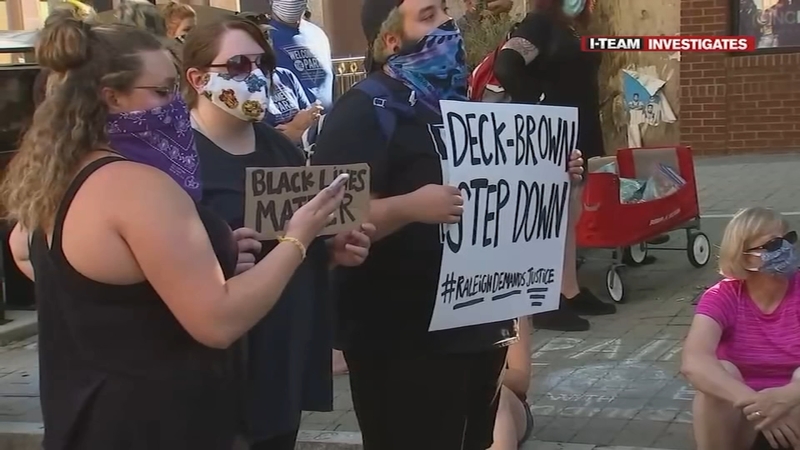 RALEIGH, N.C. (WTVD) -- Thousands of North Carolinians took to the streets demanding criminal justice reform following George Floyd's death on May 25, 2020. A year later, those cries for change have not translated into significant laws passed at the state level.

In the year since Floyd's death, 50 states have introduced legislation targeting the criminal justice system, according to the National Conference of State Legislatures (NCSL), an organization that tracks state legislation.

Despite the immediate nationwide action, only half of the state has actually passed significant legislation, according to NCSL.

Britt also explained that there wasn't an opportunity for legislators to consider bills filed after Floyd's death until recently.

Those discussions have led to lawmakers filing dozens of bills filed in the past year. The bills focus mainly on accountability and transparency from law enforcement agencies. The topics including training, body cameras, discipline databases and bail.

Numerous bills received approval this month by part of the General Assembly.

In the House, representatives approving bills that would require officers to intervene and report excessive use of force, requires psychological screenings for officers and provide mental health resources. Other bills passed would enhance agencies' hiring procedures.

Many of these topics rolled into Senate Bill 300 that North Carolina senators unanimously passed two weeks ago.

Britt is the primary sponsor of Senate Bill 300 and is hopeful it will become law.

"If the bill passes, there may be some other things that we need to talk about. Right now, I think Senate Bill 300 does a pretty good job of tackling all the areas that I think we need to really look at now to look at protecting our good police but also weeding out any bad apples," Britt said.

The bill tackles a multitude of criminal justice reform issues including creating databases for use of force incidents and officers' discipline records, requiring officers to intervene on excessive use of force, expanding training, shorting the timeline for body camera footage release to victims' families.

"I wanted to make sure I was involved in formulating those policies that would be able to assist law enforcement, while not inhibiting law enforcement, and that is why I thought it was so important to get all those stakeholder groups at the table," Britt said.

Fred Baggett said the N.C. Association of Chiefs of Police supports the bill and other action some lawmakers are considering but reminds legislators that targeting police is only part of the solution.

"Law enforcement is seriously looking at itself and that's a good thing. But remember that law enforcement must deal with issues because no one else is dealing with them," Baggett said.

He explained police have become the default for handling mental health, poverty and drug abuse.

Mohammed said he understands this. The Mecklenburg lawmaker served on Cooper's task force that made 125 recommendations to improve all aspects of the criminal justice system. He has filed multiple bills off of these recommendations.

"We've got to be able to make sure we're supporting our law enforcement as well. And the way we do that is making sure we approach the issues that affect people across North Carolina in a holistic way," Mohammed said.

Part of that holistic change is occurring faster at the local level. Many local governments have formed citizen review boards and started conversations while local police agencies have internally reviewed their own policies.

DeViere said he continues to talk to advocates regularly to remind them that the process moves slowly but their actions were an important step.

"Unfortunately, it's a process and helping them understand that change sometimes doesn't happen quickly, but it happens when we stay consistent when we stay focused on what we're trying to do," DeViere said.

As many wait for their demands to translate into laws, Mohammed said lawmakers are continuing to listen.

"It's because of their protests, it's because of their outcries, it's because of the tears that they shed, it's because of their frustration their anger and their participation in our democratic process that not only in states like North Carolina, we're beginning to see some sort of progress in the justice system, but we're beginning to see that progress in a number of states and I'm hopeful for that," Mohammed said.
Report a correction or typo
Related topics:
raleighnclegislationgeorge floydi teampolice
Copyright © 2022 WTVD-TV. All Rights Reserved.
I-TEAM
Fayetteville PD on track to full staffing; what about Durham, Raleigh?
Wake County reports highest rate of COVID-19 cases per capita in NC
Shortage of mental health professionals persists as need grows
Durham County Sheriff reveals cross-county 'Strike Team'
TOP STORIES
AAPI heritage celebration highlights cultures and traditions
Barbershop Buzz helps concerned men share fatherhood advice and tips
Firefighters called to two-alarm fire in Cary
1 person injured in shooting in Fayetteville, police investigating
1 person is left seriously injured after 8 car crash in Durham
Runner dies after collapsing at finish line of Brooklyn Half Marathon
Volunteers at Raleigh church package meals for people in need
Show More
Russia's claim of Mariupol's capture fuels concern for POWs
Man charged in Hope Mills double murder
Some peanut butter recalled for potential salmonella
Smith, Raanta, Hurricanes top Rangers for 2-0 series lead
First formula flights from Europe to arrive this weekend
More TOP STORIES News