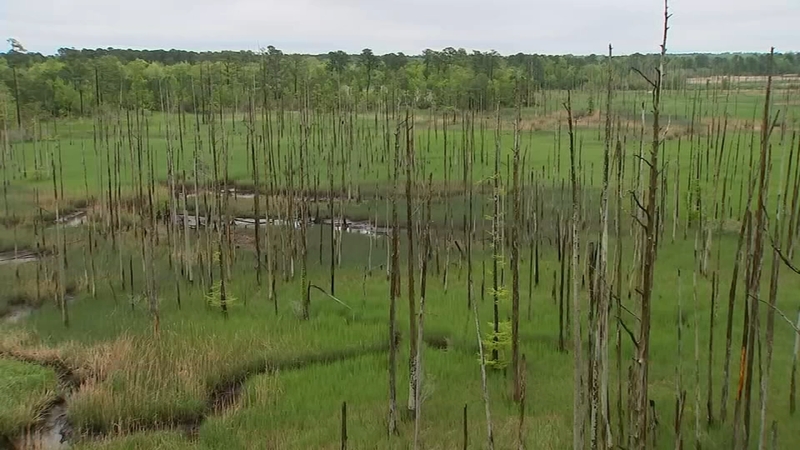 Researchers have been studying Ghost Forests forming along much of the east coast of the country, especially in areas of eastern North Carolina.

Ghosts Forests are areas full of dead trees, scientists say they all died rapidly and recently, and the cause is climate change as well as rising sea levels.

"It's risen over 11 inches since 1950 in North Carolina," explained Duke Professor of Biology Justin Wright. "it's really sad to see all these dead trees, but they're also really the canary in the coal mine."

Wright says with sea levels rising, seawater seeps into aquifers and freshwater wetlands, killing vegetation including trees. Irrigation dredging meant to drain water out of mass areas of land is now allowing the intrusion of saltwater, especially with rising storm surges, leading to the death of many trees far inland from the coast.

"They can persist 10-15 miles from the coast," Wright said about how far his research found Ghost Forests inland.

Wright and his team of Duke researchers studied NASA satellite images to get a better understanding of how widespread the problem is and when the rapid spread began in hopes of finding the trigger.

"When we think of sea-level rise, we largely think of it as being a problem right on the coast," Wright said. "And, this research shows that it is having really far impacts inland."

Wright's research found storm surge from Hurricane Irene in 2011 proved the most devastating to the Alligator River National Wildlife Refuge on the Albemarle Peninsula in Dare County, North Carolina. The refuge had been experiencing a five-year drought when Irene hit. Wright's research showed Ghost Forests have rapidly taken over about eleven percent of the tree cover in the refuge in the past thirty years.

As Ghost Forests change the landscape it can lead to agriculture collapse as well as habitat and land loss. Wright says researchers are hoping lessons learned through studying Ghost Forests in North Carolina can help scientists around the world predict and manage the effects of future storms.

"Could we restore these, can we grow the trees back there, or maybe what we want to do is turn them into salt marsh, which is another great type of habitat to have," Wright said. "But, if that happens, where are the forests gonna be because the forests are really important habitats for a lot of the species we're interested in."