'I was just screaming:' Troubleshooter gets response from GM after woman's truck goes up in flames 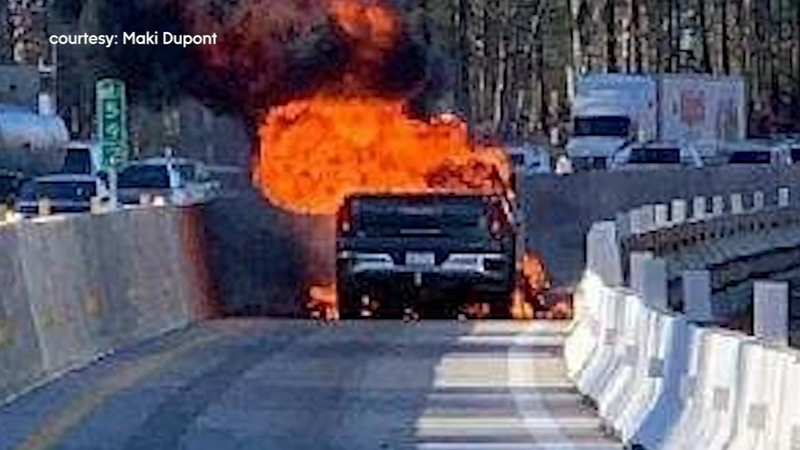 ABC11 gets response from GM after truck catches fire on highway

A Wake Forest woman is thankful to be alive after her truck went up in flames while she was driving down the highway.

"I mean, it was a miracle. I mean God definitely saved me from dying in that," Debra Moorman said.

It all started when she was driving down the highway on a road trip to pick up her service dog Daisy.

Out of the blue, she says, the check engine light came on.

"Flames were coming out from the hood right at the driver side and a whole bunch of black smoke," she said.

"I tried to hit the brakes, no brakes, I tried to change gears, no gears to change. I try to open the door, deciding it's better to jump out and the doors won't open," Moorman said.

As flames engulfed her truck, she pressed the OnStar button.

"I was just screaming to her to try to help me stop the vehicle or open the doors because I was going to die," Moorman said.

All of a sudden the door unlocked, she said, and she jumped out of the truck while it was still going about five miles per hour. Luckily, Moorman made it out safely as she watched the fire destroy her truck and everything inside.

Moorman's insurance covered the loss of the truck, but she also reported the fire to General Motors after it happened in January.

"I wanted GM to investigate it and then reimburse me for the extras my insurance doesn't cover," she said.

Troubleshooter gets results for worker who was told she'd have to pay back $8,300 in unemployment benefits

GM did respond and sent an investigator to her home to look at what remains of the truck, but weeks went by and there was no resolution.

"If someone had a baby in a car seat, could they get them? And GM is not being really responsive in trying to figure out what happened," Moorman said. "I wanted GM to investigate it and then reimburse me for the extras my insurance doesn't cover. I don't feel like this is something I should be out of pocket for because obviously, this is a brand new truck, not my fault, I didn't do anything wrong."

Moorman reached out to Troubleshooter Diane Wilson and Wilson got in touch with General Motors.

A spokesperson said: "We have been working with Ms. Moorman since she first contacted us and will continue to do so as needed. Safety is a foundational commitment at General Motors."