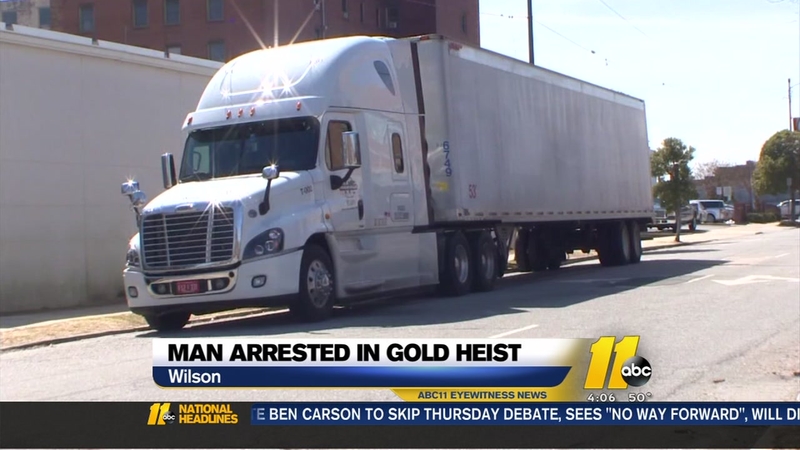 MIAMI (WTVD) -- The FBI has arrested a south Florida man in the heist last year of $4.8 million in gold bars from a truck along Interstate 95 in Wilson County last year.

Miami FBI spokesman Mike Leverock says 46-year-old Adalberto Perez was taken into custody Wednesday at his home in Opa-Locka. Details about the charges and Perez's alleged role in the robbery were expected to be released later.

The truck shipment of 275 pounds of gold bars was intercepted in March 2015 by three armed thieves on its way from Miami to Massachusetts.

Guards had just filled up the truck with fuel, and reported a strong gasoline smell that made them feel ill. When the truck stopped, three men pulled up in a white van and robbed the guards of five 5-gallon buckets filled with 275 pounds of gold bars.

A Miami man previously pleaded guilty to extortion by attempting to sell one gold bar.

Miguel Bover, 49, was not involved in the March 1, 2015 robbery, but was sentenced to more than three years behind bars for trying to facilitate the sale of the stolen bar on the black market.