Good Samaritan takes off boots, gives them to homeless man 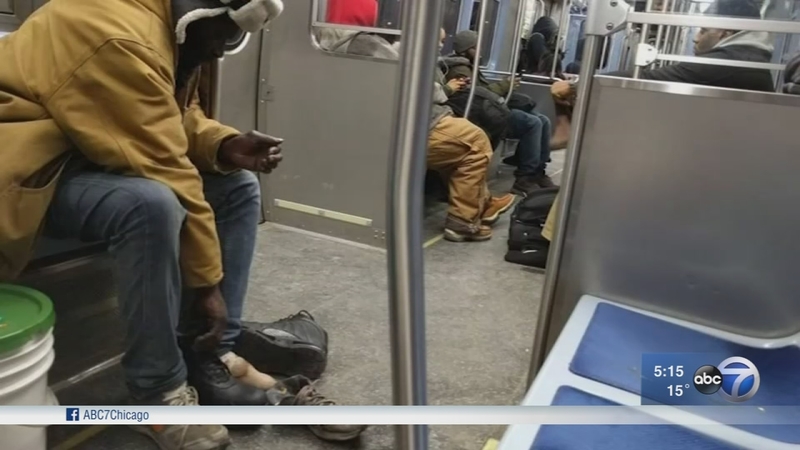 Good Samaritan gives homeless man boots off his own feet

CHICAGO -- An act of kindness by a good Samaritan is getting a lot of attention on social media.

Maurice Anderson took a brand-new pair of pricey snow boots off his feet and gave them to a homeless man on a train.

Anderson was on his way from the airport to his daughter's house on the South Side when his quick act of kindness caught the eye of another passenger.

"This is not what you see on the train every day, it was amazing," witness Jessica Bell said.

A good Samaritan gave a homeless man on a CTA Red Line train the boots off his own feet.

Bell witnessed the act of kindness on the Red Line last week.

She was so amazed by it, she shared the story on social media and now, it's gone viral.

The Chicago lawyer was headed home and was seated across from an older homeless man. Near him was passenger Anderson.

"I looked down and his shoes were off, one of his socks was bleeding through," Anderson said.

Anderson said the homeless man told him his feet may have been frostbitten.

Without hesitation, Anderson unlaced his brand new pair of $260 snow boots and handed them over to the homeless man along with a pair of socks.

"I think that's what really resonated with me," Bell said. "It was a really selfless and quiet act, no fanfare. It just happened."

Bell decided to share the story on Facebook because "during a time when hate and apathy are rampant, quiet compassion appears without warning."

Anderson, who had an extra pair of shoes in a suitcase, said he would rather help than judge people in need.

"He's already in distress, he's out in the cold, riding the train," Anderson said. "If I'm not reaching out to help someone, I can't say anything."

Anderson and Bell said the homeless man was in shock over the kind gesture and very much appreciative. Anderson said he often helps the homeless by buying them clothing or supplies.