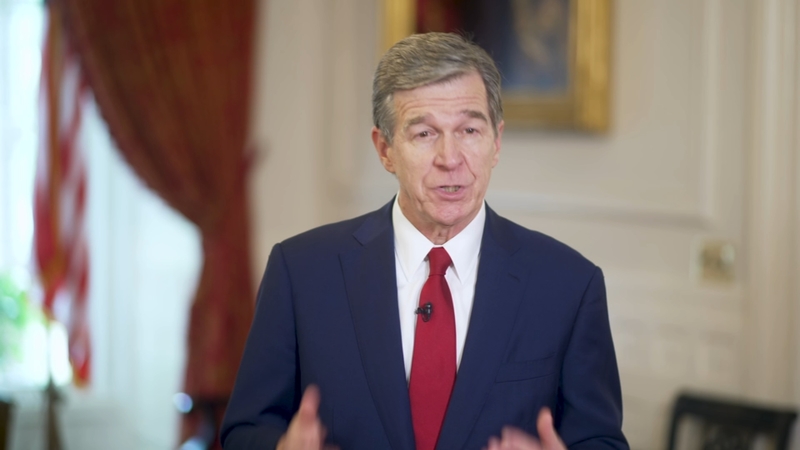 In the video, Cooper says he says he takes "a strong responsibility" to do all he can to keep children safe at school.

He pointed out that he took executive action in 2019 to strengthen background checks.

But he says we need stronger laws.

"We cannot wait any longer. It has to stop," Cooper proclaimed about the bloodshed in Texas and the political responsibility to do something about the nation's gun laws. However, gun reforms require Democratic and Republican votes -- and there is no sign of compromise.

Cooper called on the U.S. Senate to revive a long-stalled bill for universal background checks and pass a national ban on assault-style weapons, such as the AR-15 rifle the killer used in the massacre in Texas.

"Republican leaders in Congress and in our state legislature need to stop the excuses and work with us to do more," Cooper said. "A strong Universal Background Checks law is now sitting in the U.S. Senate. Pass it and the President will sign it. And while they're at it, they should ban assault weapons.

RELATED: 4th-grade teacher, 10-year-old boy who was 'life of the party' among Texas school shooting victims

About the school massacre, Tillis said, "It's horrible... What we need to avoid is the reflexive reaction to say this could all be solved by not having guns in anyone's hands."

Back on the Senate floor, Tillis' colleague from Connecticut, the site of the Sandy Hook School mass shooting, was pleading for a different answer.

"Our kids are living in fear every single time they set foot in the classroom because they think they're going to be next. What are we doing?" said Connecticut Democrat Chris Murphy.

Tillis went on to say, "People immediately want to jump to red flag laws ... Virtually every one that I've seen has been one that sweeps up law-abiding gun owners into what I consider to be an overreach."

Cooper added that in the meantime, state lawmakers need to take more action on related laws.

"Until they do, state legislators should close North Carolina's permit loophole for these weapons," he continued. "Pass it and I'll sign it.

As for mental illness -- the other troubling aspect of the Uvalde, Texas, school shooting and other mass gun tragedies -- Cooper touched on that as well.

READ MORE: Experts offcer advice when talking to children about the Texas massacre

"I've had gun advocates tell me that the problem is not assault weapons, but mental health," Cooper said. "Well, there's a bill right now in the legislature that will provide billions of dollars for mental health through Medicaid expansion. Pass it and I'll sign it.

Medicaid expansion could be closer than ever to a reality in North Carolina.

Senate leader Phil Berger, R-Rockingham, was a longtime opponent of accepting federal funds through the 2010 Affordable Care Act to cover people that make too much money to qualify for traditional Medicaid, but too little to qualify for subsidized private plans.

Opposition by Republicans has left North Carolina one of the dozen states that have not accepted the match.

"If there's a person in the state of North Carolina that has spoken out against Medicaid expansion more than I have, I'd like to meet that person," Berger said at a news conference, but now, "I think (expansion) is the right thing for us to do."

Berger revealed last fall he was willing to consider expanding Medicaid as part of budget negotiations. Earlier this week, Senate Republicans revealed they were considering seriously a package of health care access and insurance changes including expansion, which was disclosed Wednesday and heard in a Senate committee. A committee vote was expected Thursday.

ABC11 also reached out to the top two Republicans in the state legislature, Berger and House Speaker Tim Moore for their reactions to Cooper's new call for stricter gun laws. The pair has not yet responded.