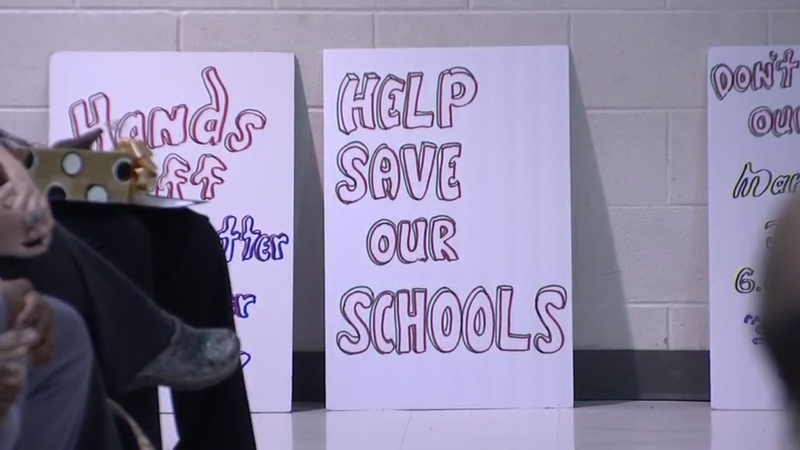 OXFORD, N.C. (WTVD) -- Critics of the Granville County School Board's decision Monday night walked out in protest. Others shouted "sellout" and "shame" after the board voted to close and consolidate two of the county's historically black schools.

For the board's majority, it was a dollars-and-cents decision to shut down Joe Toler Oak Hill Elementary School and to consolidate Mary Potter Middle School with Northern Granville Middle.

"All of us love these schools," said District 3 Member Rob Rivers who supported the closure and consolidation. "I have lost more sleep over this decision than any decision in my life."

The closure and consolidations are part of the school board's reorganization plan to confront lagging enrollment.

The number of students at Mary Potter Middle has dropped from 464 students in 2009 to 248 this school year. Joe Toler Elementary's enrollment has dropped to 187 students from 229 students 10 years ago.

But the crowd largely rejected the board's argument that it's too expensive to operate these schools.

For Joe Toler parents, it's the only school in the northern end of the county. Their children will now be forced to take an hour-long bus ride to Northern Granville Middle.

"The students that I teach every day have parents who would have to travel 12 to 15 miles for a PTO meeting or for an afternoon agriculture club that meets until 4:30," said Toler Elementary teacher Heather Daniel.

For supporters of Mary Potter Middle, this was a heartbreaking decision. The school was founded in 1889 as a private boarding school to educate newly-freed slaves. It boasts a long list of distinguished alumni including former NAACP President Ben Chavis and former NBA player and coach John Lucas.

School board members also voted to study a plan to convert Mary Potter Middle into the school system's central office complex. That did little to soothe the hard feelings about the closures.