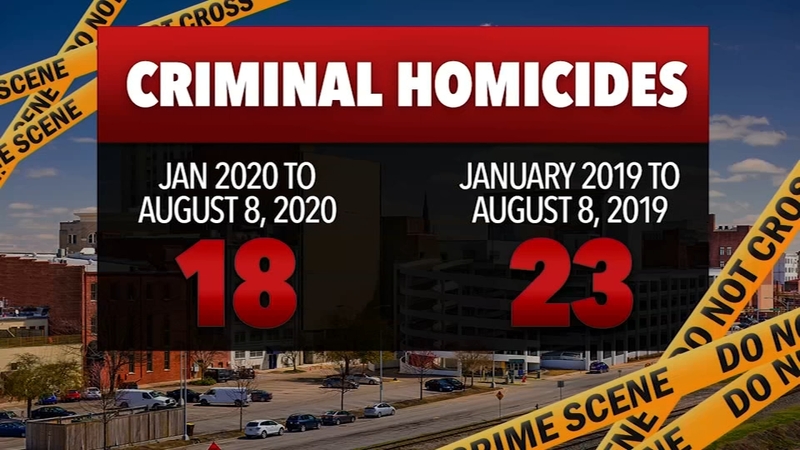 DURHAM, N.C. (WTVD) -- Friday will mark one month since 12-year-old Tyvien Mclean was shot. On July 14, a stray bullet struck his head inside Cornwallis public housing.

Mclean died a few days later at the hospital. His killer still out there.

"I sat at Tyvien Mclean's funeral and I watched kids 8, 9 and as young as 7, absolutely breaking down. And they were inconsolable," said Mark-Anthony Middleton, a member of Durham City Council. "Mourning your peers because they were taken by gunfire--that's not how it's supposed to be."

Innocent people dying in Durham from gun violence is a headline frustrating Middleton. He is launching a new initiative called 1,000 Black Men.

Middleton announced the grassroots campaign recently on Facebook, along with other Black men. Middleton said the launch was at the request of Durham activist Nia Wilson of Spirit House.

The group is asking Black men from all walks of life, educational backgrounds and economic statuses to step up and join them.

"These thousand Black men will be a reserve force to muscularize initiatives that are already there, already going on in some instances," Middleton said. "We're not looking to come in and take things over. If you got a mentoring program going on in your neighborhood that needs more mentors, well, we have 1,000 Black men that are willing to immediately bolster what is already going on."

One of the victims is 18-year-old Syncere Burrell. He was shot in the area of Lincoln Street and Linwood Avenue.

Earlier that day, 21-year-old Joshua Lindsay died from a shooting on Jackson Street. Investigators arrested Malik Joseph, 22, of Durham, and charged him with murder.

DPD released data that shows the homicide rate is down 21 percent year-to-date from this same time period last year, but that rate doesn't include Monday's homicides.

Aggravated assaults with a gun are up 50 percent.

The new group 1,000 Black men hopes their efforts, in conjunction with the city's initiatives, will help change these headlines.

"We need money. We need investment but there is some places the government just can't go," Middleton said. "Some of us are prepared for direct interventions with some of our young people."

If you're Black man in Durham and want to join 1,000 Black Men, the group is launching a website and a social media page later this week.