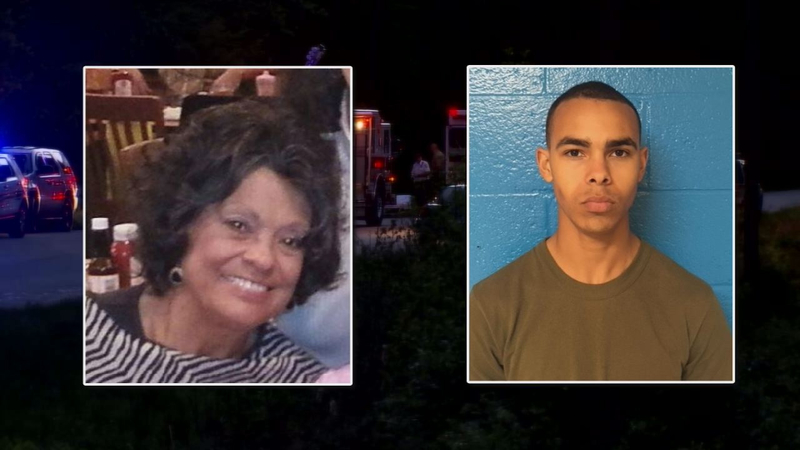 ROCKY MOUNT, N.C. (WTVD) -- An 18-year-old who went AWOL from the military has been charged with murder in the disappearance of his grandmother.

Detectives in Halifax County had been searching for 74-year-old Sallie Copeland Evans for days after the woman's family filed a missing persons report.

On Friday night, ABC11 was at the scene as investigators found Evans' body off Highway 903 near Roanoke Rapids, not far from the house of the missing woman.

Isaiah Kahleal Evans Caeser was charged with murder. He was also served with a fugitive warrant for desertion.

Caeser was wanted for desertion from the United States Marine Corp. He is stationed at Fort Benning, Georgia. He has been absent without leave since April 2. According to family, Evans was trying to convince Caeser to return to the military.

On Friday, Rocky Mount police were notified by the Halifax County Sheriff's Office that the 18-year-old who went AWOL was staying at the Homewood Suites at 231 Gateway Boulevard.
Investigators in Rocky Mount found him there after he used his grandmother's credit card to purchase the room.

Explosive materials were found in the room, investigators said, and the hotel had to be evacuated.

We watched as investigators pulled a body from this scene on 903 not far from house of missing 75 year old grandmother. Waiting for confirmation for sheriffs Dept on ID of body but sheriff tells me this scene is connected to missing persons case #ABC11 pic.twitter.com/xCm4bIfMv5

Sheriff Wes Tripp said the 18-year-old was also in possession of his grandmother's stolen car. Rocky Mount police contained the scene and made contact with the State Bureau of Investigations.

The SBI brought its bomb removal team to the hotel. No bomb was found.

Willie Patterson, Evans' neighbor of roughly 20 years, told ABC11 she had asked him to accompany the two of them on a drive to Camp Lejeune (the nearest military base) so she could talk to him about rejoining the military. Patterson said she didn't show up when they were supposed to leave.

"It's weird because if she was going to leave like that, she'd call me. She'd ask me to take the three little dogs she's got, she'd let me know where the keys at and I'd keep the keys till she get back," Patterson said.