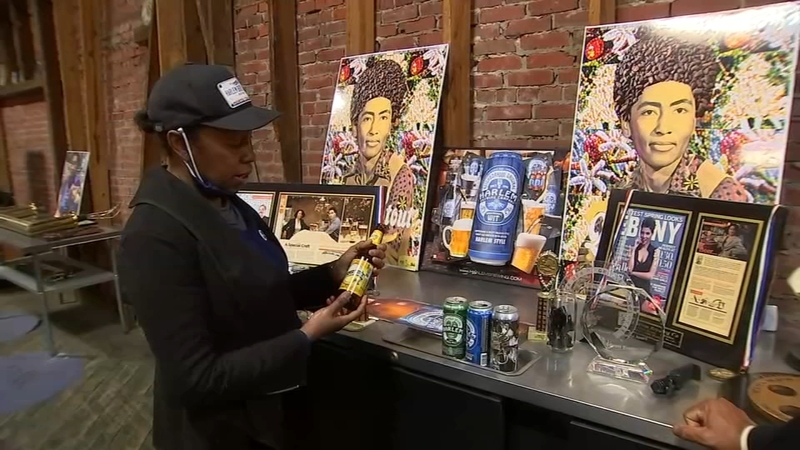 ROCKY MOUNT, N.C. (WTVD) -- Celeste Beatty's Harlem Brewing Company is more than a business she owns with her brothers Carl and Pernell Beatty. Spend a few minutes in a conversation with her and it's soon apparent that craft brewing is her life's work. During a recent tour of a building she's developing for an expansion of the business, she had cans and bottles of the company's products lined up behind a future bartender's position.

"This is the first beer I actually launched in New York, our Harlem Sugar Hill Golden Ale," she said, smiling. "My mother is a big Duke Ellington fan. And, of course, we know the story about taking the A train up to Sugar Hill in Harlem. Billy Strayhorn who lived in Harlem wrote that song. So again, looking at beer as a place to celebrate. I used to play the saxophone. So that was kind of selfish design. But just talking about it, it really becomes a conversation piece."

She has big plans for the cavernous former tobacco warehouse she's renovating.

"(A) historic tobacco warehouse where in 1946, Black leaf tobacco workers gathered to cast a vote for better work and better pay. So it's (a) historic warehouse. We're in the process of converting it to a brewing space and what we call a brewers village, for us to brew our beers but to share that through opportunity and training with other brewers who would not have a chance to get into brewing. The Harlem Brew South Tap Room and Brewery will be brewing here. We've already had a number of events. We had a farm to fork dinner here with Black farmers when they brought in their produce. So, it's been an active event space," she said. "But we will continue to those types of events, community-oriented events, music events, and of course, people will be able to come here enjoy our beer."

Beatty told us about the opportunities for growth within the popular craft brewing industry.

"There's less than 1% of African American brewers in the United States. There's more and more people entering the market. I don't know the exact number, it's a small number. But we're looking, through partnerships such as the conversation we (had) at the Raleigh Brewery, to expand on that number through collaboration," she said.

Growing up in Winston-Salem, Beatty enjoyed cooking with her mother.

"My mom has also helped me homebrew. And in celebrating the blackest, beautiful movement she had during the pandemic we had a chance to go through stuff, talk and have real conversations," she said while holding a can of stout that had her mother's picture on its front. "I would visit my mom and I started going through her pictures. I said mom, what about me doing a beer celebrating you? 'You know, honey, I don't want that.'"

Her mother's not the only person she's honored on a beer can since 2000 when she created the Harlem Brewing Company in New York City. She's showed us one with a picture of the late Gil Noble, a pioneering reporter, anchor and host of "Like It Is," a news and public affairs show that aired for many years on ABC11's sister station, ABC7/WABC-TV.

"He lived in Harlem, and he also lived in Montclair (New Jersey). So I teamed up with Montclair Brewery to do a beer celebrating his more than 40 years of journalism and his TV show. He was a great guy. I met him many times before he passed away," she said. "He has roots in Jamaica (and) roots in Harlem. So we did a Jamaica style Porter has a lot of great dark, malty flavors in it, with the Jamaican pimento."

Now as she expands the craft beer concept back in her home state, plans call for this space to open by August this year. But if you're in Rocky Mount and you want the beer now, it's possible to get some.

"We have a couple of restaurants here that carry it. Larema Coffee House, Chill Spot. Of course, we'll be brewing it here and it'll be available," she said. "We first launched our beer in 2001 at Sylvia's Restaurant, the first restaurant to sell our beer. We were very excited about that! We sell our beer in restaurants and bars throughout the city of New York. We also sell in the DC-Maryland area, in the North Carolina area. We're launching in Georgia, and we sell it in on-premise, off-premise grocery stores. Harris Teeter, Food Lion, Total Wine and different bars and restaurants."

She also plans to offer classes for aspiring brewers, along with job opportunities.

"All cultures, all races, can come together to collaborate. Yes, around beer but in terms of opportunity for the community. That's something I get really excited about," she said. "What kept me in the craft beer industry was the socialization. Connecting with people, being able to have conversations, gatherings at the bars in a way that we can connect some of the dots around understanding one another. That's the part that I really love!"

She's a proud graduate of Shaw University: "My particular interest was international relations. Really creating a forum where different cultures could connect and bring world peace. That's what I wanted to do, but I discovered in the brewing industry that I probably had a better chance of bringing world peace and understanding over beer than the complications of politics!"

She looks forward to hearing from people who, inspired by her journey, want to learn more about craft brewing.