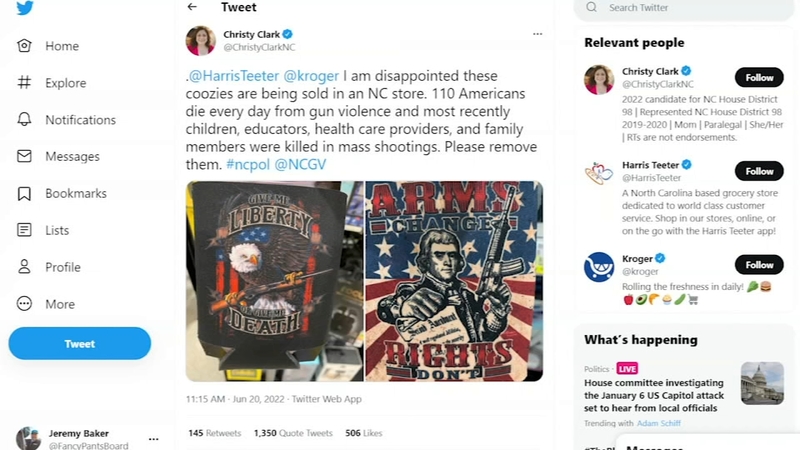 CHARLOTTE, N.C. (WTVD) -- Harris Teeter and Kroger are pulling gun-themed coozies that were recently being sold a North Carolina store north of Charlotte.

Christy Clark, a candidate for the NC House District 98 seat, spotted the coozies and took to Twitter to call the grocery store chain out.

.@HarrisTeeter @kroger I am disappointed these coozies are being sold in an NC store. 110 Americans die every day from gun violence and most recently children, educators, health care providers, and family members were killed in mass shootings. Please remove them. #ncpol @NCGV pic.twitter.com/7RTkF1SOot

A few hours after that Tweet, Harris Teeter responded that the coozies were "being removed from all store locations."

Clark has since received blowback for her actions, specifically from her political opponent and current representative from District 98, John Bradford.

While standing up for her version of “political correctness” she chooses to silence those who disagree by turning off their ability to leave comments. Everyone has the right to be heard. https://t.co/n7ojxdNj2K pic.twitter.com/h73S1KriaZ