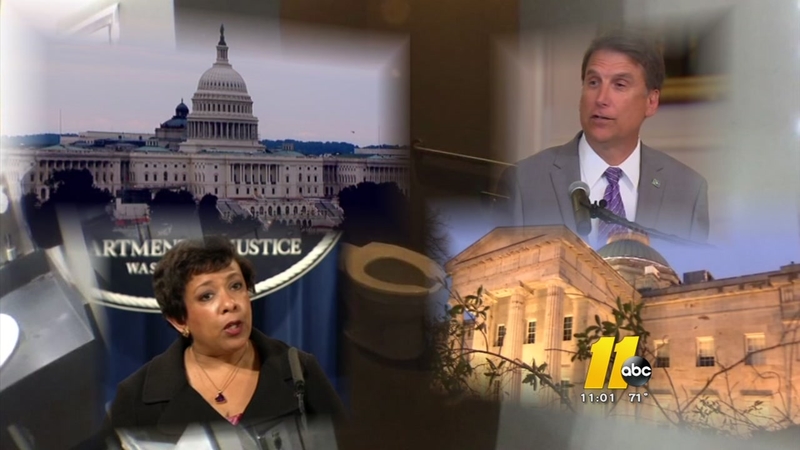 RALEIGH (WTVD) -- A potentially epic clash over transgender rights took shape Monday when the U.S. Justice Department and state of North Carolina sued each other over House Bill 2 after the governor refused to back down.

North Carolina Gov. Pat McCrory filed a lawsuit Monday asking the federal court system to clarify federal law on the HB2 issue. The Department of Justice responded with a lawsuit of its own saying that part of the controversial law "constitutes a pattern or practice of employment discrimination on the basis of sex in violations of Title VII of the civil rights act of 1964".

RELATED: SUPPORTERS LINE UP ON BOTH SIDES OF HB2 LEGAL FIGHT

The DOJ is seeking a permanent injunction to block the law.

The federal lawsuit says that "transgender individuals seeking access to covered facilities have suffered and continue to suffer injury, including, without limitation, emotional harm, mental anguish, distress, humiliation, and indignity as a direct and proximate result of compliance with and implementation of HB2."

McCrory has been under pressure since the U.S. Justice Department warned last week that the law passed in March violates civil rights protections against sex discrimination on the job and in education for lesbian, gay, bisexual, and transgender people.

According to the Governor's lawsuit, he seeks "declaratory and injunctive relief" against the United States of America, the United States Department of Justice, Attorney General Loretta Lynch and Principal Deputy Assistant Attorney General Vanita Gupta, "for their radical reinterpretation of Title VII of the Civil Rights Acts of 1964 which would prevent plaintiffs from protecting the bodily privacy rights of state employees while accommodating the needs of transgendered state employees."

In a statement Monday, McCrory said: "The Obama administration is bypassing Congress by attempting to rewrite the law and set restroom policies for public and private employers across the country, not just North Carolina. This is now a national issue that applies to every state and it needs to be resolved at the federal level."

Our lawsuit seeks to ensure that NC continues to receive federal funding until the courts clarify federal law & resolve this national issue.

Senate Leader Phil Berger (R-Rockingham) and House Speaker Tim Moore (R-Cleveland) have filed their own lawsuit that is similar to McCrory's.

At a news conference Monday afternoon, Lynch accused McCrory and the General Assembly of creating "state-sponsored discrimination" and likened HB2 to laws of the Jim Crow era.

"Let us learn from our history and avoid the mistakes of the past," said Lynch.

She said she will be looking at curtailing federal funding to the North Carolina Department of Public Safety and the UNC school system.

"You have been told this law protects vulnerable populations from harm, but that is just not the case. Instead, what this law does is inflict further indignity on a population that has already suffered far more than their share. This law provides no benefit to society - all it does is harm innocent Americans," said Lynch.

Earlier in the day, the American Civil Liberties Union, ACLU of North Carolina, and Lambda Legal - who are challenging House Bill 2 in federal court - accused McCrory of "doubling down" on discrimination against transgender people.

"The federal government made clear that HB 2's mandate of discrimination against transgender people violates federal civil rights laws but McCrory and other political leaders in the state have decided to risk federal funding to maintain that discrimination," they said in a statement. "Transgender people work for the state of North Carolina, attend school in North Carolina, and are a part of every community across the state. It is unconscionable that the government is placing a target on their backs to advance this discriminatory political agenda. Lawsuits are normally filed to stop discrimination-not to continue it."

But McCrory's lawsuit states; "The Department's position is a baseless and blatant overreach."

In the lawsuit, McCrory also said he has directed state agencies to make a reasonable accommodation of a single occupancy restroom and says the state also allows private companies to set their own policies for bathrooms, locker rooms, and shower facilities.

"I'm taking this initiative to ensure that North Carolina continues to receive federal funding until the courts resolve this issue," said Governor McCrory.


McCrory has called the law a common-sense measure. He said it's designed to protect the privacy of people who use bathrooms and locker rooms and to expect all people inside the facilities to be of the same gender. McCrory said Sunday he was not aware of any North Carolina cases of transgender people using their gender identity to access a restroom and molest someone, a fear frequently cited by the law's supporters as the main reason for its passage.

The new law also excludes lesbian, gay, bisexual and transgender people from state anti-discrimination protection and bars local governments from adopting their own anti-bias measures. But the Justice Department has focused largely on the bathroom provisions.

Nearly half of North Carolina registered voters last month said cities should be prohibited from passing ordinances such as Charlotte's, according to a poll by Elon University. Nearly four out of 10 said cities should have that leeway.

Several other states in recent months have proposed similar laws limiting protections for gay, bisexual and transgender people. On Monday, the American Civil Liberties Union of Mississippi sued that state over a law that will allow workers to cite their religious objections to gay marriage to deny services to people.

McCrory got some support Monday from one of the nation's largest states.

"The people of the United States, through their representatives in Congress, enacted the Civil Rights Act of 1964 to ensure, in part, that men and women are treated equally. Congress has not changed this law to mean that individuals may choose whether they want to be male or female for the purpose of public accommodations. One's sex is a biological fact, not a state of mind, and this threat to North Carolina is the latest in a long series of efforts by an unaccountable federal executive branch. My office stands with Governor McCrory and the people of North Carolina regarding this unconstitutional form of federal overreach."

Paxton's North Carolina counterpart, Roy Cooper, a Democrat running against the Republican McCrory for governor, has refused to defend the law and has called for its repeal. On Monday, he warned in a video that McCrory "is pouring gas on the fire that he lit" when he signed the measure.

"Enough is enough," Cooper said. "For the sake of our schools, our children, our economy, and our good name, it's time to set the politics aside and undo this discriminatory law now."

In her comments, Lynch said her lawsuit "is about a great deal more than just bathrooms. This is about the dignity and respect we accord our fellow citizens and the laws that we, as a people and as a country, have enacted to protect them - indeed, to protect all of us. And it's about the founding ideals that have led this country - haltingly but inexorably - in the direction of fairness, inclusion and equality for all Americans."

RELATED: SPELLINGS ON HB2: UNC SYSTEM IS 'CAUGHT IN THE MIDDLE'

While McCrory has agreed that the Justice Department could warn of consequences if North Carolina established separate bathrooms for white and black people, the governor said the agency goes too far in contending that transgender people enjoy similar civil rights protections.

"We can definitely define the race of people. It's very hard to define transgender or gender identity," McCrory said. He added that he had made a request for more time to respond to the Justice Department but that was denied.

The governor has become the public face of the law, which has been the subject of fierce criticism by gay rights groups, corporate executives and entertainersdemanding that the law be repealed. North Carolina has already paid a price for the law, with some business scaling back investments in the state and associations cancelling conventions.

Senate leader Phil Berger said last week that he's frustrated because "we have a federal administration that is so determined to push a radical social agenda that they would threaten" federal funding. "I just think the people should be frustrated and people should be angry."

In her comments at Monday afternoon's news conference, Vanita Gupta - head of the Department of Justice Civil Rights Division said the DOJ is not overreaching or creating new law on the issue.

The Justice Department noted a ruling last month by a federal appeals court that a transgender Virginia high school student has the right to use bathrooms that match his new identity.

The ruling by a three-judge panel of the 4th U.S. Circuit Court of Appeals is binding on five states, including North Carolina. A Virginia school board is seeking a re-hearing by the entire appeals court.