Despite their lifesaving superpowers, medical professionals still need their own protections against the new coronavirus.

Shortages of PPE, in fact, have plagued almost every county in every state across the country, leaving local governments, first responder agencies and health care facilities competing with each other and the entire world in their chase to keep their workers safe.

"If they don't protect themselves and they can't come to work, then we can't come to provide the same level of service we have right now and that's bad for everybody," Hubbard said.

According to the North Carolina Department of Health and Human Services, the Tar Heel state has received only a third of the supplies it requested from the federal government's Strategic National Stockpile; the gap leaves the state short of three million pieces of equipment ranging from N95 respirators to face shields to googles.

While the federal government isn't the only source for PPE, North Carolina has run into issues securing supplies from the private sector as well: only 6% of the $335 million worth of orders have been fulfilled.

There is somewhat of a supply chain, with the state trying to provide PPE to all state agencies and then allocate PPE to counties across the state, who are submitting orders on behalf of the myriad public safety and government operations on the municipal level.

"It is frustrating," Steve Newton, Chatham County Emergency Management Director, tells ABC11. "It is frustrating for us not being able to provide exactly the PPE that everybody expects, and is used to, and uses during normal circumstances."

Newton adds that supply shortages are not a new challenge for the emergency management department, but unlike responding to emergencies like hurricanes, the scale and length of the pandemic has made this response much more challenging.

"We tend to be done with (hurricanes) within 30-45 days and the acute imminent threat in a matter of a week," Newton explains. "This has been a sustained incident for us."

The ABC11 I-Team surveyed 22 counties around the Triangle to learn how leaders are accessing PPE needs and allocating supplies. Most counties reported their supplies were enough to sustain themselves for at least 30 days, but officials offered several warnings about how situations change daily, making anticipating needs difficult.

"If people go back to what we consider to be normal, and this virus has not subsided and we don't have vaccine and treatments, what we hope is a decline or leveling off then becomes we suddenly increase all over again," Hubbard warned.

Andrew Jacobs, Hoke County's Emergency Management Coordinator, likened N95 and gowns as "gold." Vance County, meanwhile, continues to have a request for the state to supply isolation gowns that hasn't been fulfilled since March 23.

Edgecombe and Halifax counties, moreover, told ABC11 they're in a similar predicament, as is Person County, which reports only 65% of requests filled since mid-March.

"At the present time, our vendors are unable to fulfill the majority of our PPE needs," Wilson County's Emergency Management Director, Gordon Deno, reported.

Similarly, Halifax and Northampton counties said no shipments from private vendors were available and its requests were backordered.

Hospitals, EMS departments and long-term care facilities can make their own requests for supplies directly through the state's system, but they aren't the only ones in each county needing supplies.

County emergency operation centers also service the rest of the requests for workers from the tax office to solid waste to animal control. The limited supply of resources led the state to prioritize who receives supplies first.

"If I hoard supplies, if I overbuy, if I happen to have a line on masks I can get a hold of, I've got to make sure we balance our needs with the needs across the country," Newton asserts.

While many counties have reported receiving hundreds or thousands of each PPE item, workers (especially at the frontlines) are constantly going through sets of materials, sometimes for each patient they see.

Newton said a single licensed care facility might have 60 to 100 patients and some might be COVID-19 positive. He said the standard requirement is for staff to wear a full set of PPE when visiting those patients, including gloves, gown, mask, etc.

"With 60 patients, you assume they see them four times a day, so you may be burning through 240-250 or more sets of PPE," Newton estimates. 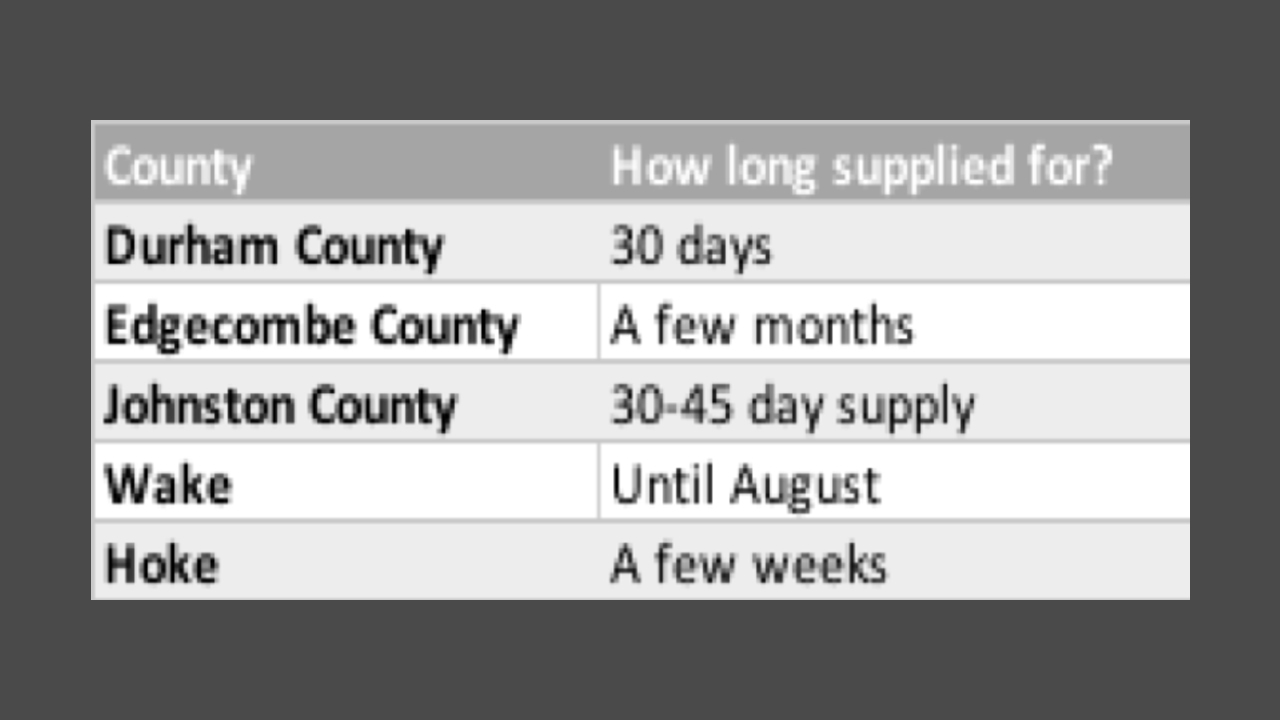 To combat the limited resources many counties have adapted the way they do business in an effort to conserve the supplies they do have; in Johnston County, fewer first responders are dispatched to scenes if an individual is displaying COVID-19 symptoms.

"It was a tough decision when we decided to knock first responder response back from what it was, and it was driven because we don't have the PPE available for EMS and for fire and law enforcement," Hubbard said.

"We have a duty to provide the service to the public, but we've got to do it in a way that not only protects the public, but we have to ensure the fire department has personnel in the coming weeks and the coming months. So we're taking these steps to not expose them," Newton said.

Counties are also reusing supplies in certain circumstances and trying improvise with a lower tier of supplies.

"We're used to just throwing stuff away," Newton recalled. "Now we wear those high-density rubber gloves and high-density apron, wash it off, disinfect it and hang it out to dry and we'll use that again."

As for the cost to the cash-strapped counties, they do get a break if any PPE is supplied by the state. Private vendors, however, aren't giving any discounts.

Since the pandemic is a federally declared disaster, though, counties are eligible to submit reimbursement for supplies and many of these costs may eventually be covered.
Report a correction or typo
Related topics:
health & fitnesssmithfieldhealthiteamcoronavirushealth carei team
Copyright © 2020 WTVD-TV. All Rights Reserved.
I-TEAM