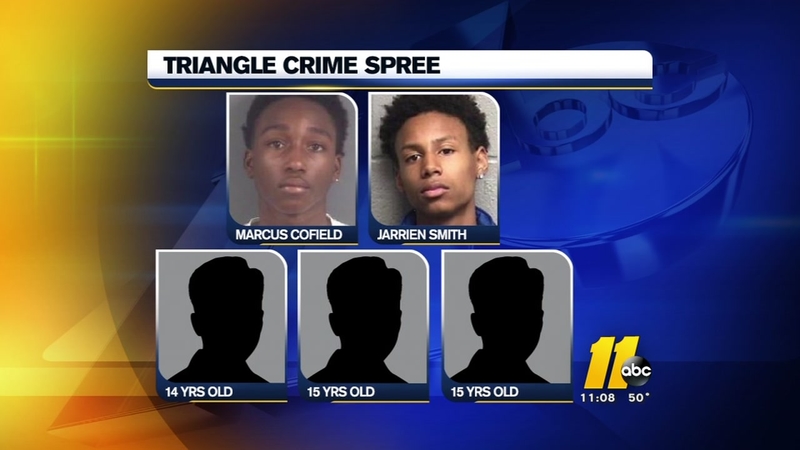 The Durham Police Department said late Tuesday that it has charged five suspects in connection with two armed robberies.

The Wake County Sheriff's Office confirms to ABC11 that the fifth suspect was captured on King Road around 10 a.m. after fleeing the scene of a crash around 4 a.m. at New Hill Holleman Road in Apex.

Authorities had been searching for the suspect in a wooded area near Shearon Harris Road, Gunter Morris Road, and New Hill Holleman Road.

The crash ended a high-speed chase that started at Alston Avenue and the Durham Freeway in Durham. It reportedly reached speeds above 100 miles-per-hour through Durham and Cary.

Authorities tell ABC11 that it all started with a carjacking that was reported hours earlier at 12:45 a.m. at 107 Arbor Way in Cary.

LISTEN: Man calls 911 to report carjacking outside his home


Cary police said a woman and her brother reported that two armed men approached them and told them to turn over their black 2006 Lexus, phone, and purse.

#Breaking-Police in pursuit now after authorities say suspects commit a carjacking, robbery and crash into a tree. #ABC11 pic.twitter.com/9K51nPeJCX

The woman's brother got hit with a pistol, which caused a minor bump on his head.

Police said the suspects then hit another car in the parking lot as the fled the scene.

Durham police are investigating whether the suspects were also involved in a shooting along the 2500 block of Chapel Hill Road near Anderson Street.

Around 2:45 a.m., a man riding his bicycle told police that two men got out of a black vehicle and attempted to rob him. He was seriously hurt and taken to Duke Hospital.

Durham police said the stolen vehicle was also linked to a robbery in the 1000 block of West Main Street in Durham. Two people were robbed outside a bar around 3 a.m., according to police.

Fifteen minutes later, a woman was standing at the intersection of Holloway Street and Park Avenue told police a passenger of a vehicle demanded her purse at gunpoint. The woman said she gave the suspect her purse and the vehicle then fled the scene. No injuries were reported.

Police said an early morning robbery at a Durham McDonald's on Tower Boulevard was not connected to the string of violent events.

Authorities are still investigating all the incidents.