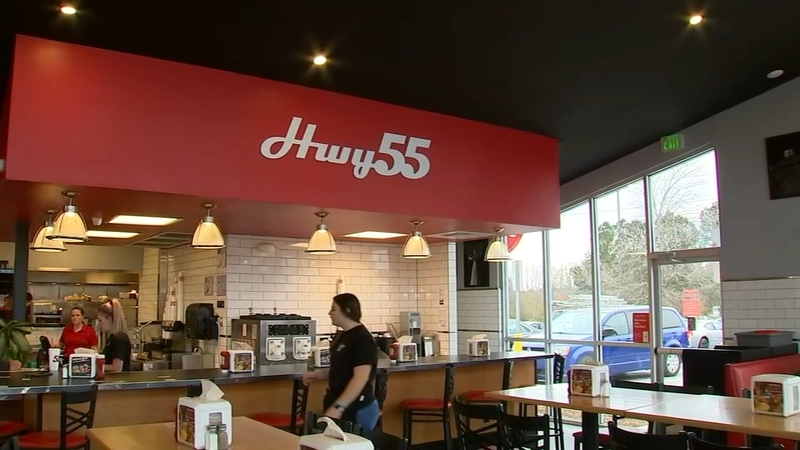 LILLINGTON, N.C. (WTVD) -- Hwy 55 Burgers, Shakes & Fries is finding a unique way to deal with the labor shortage at its Lillington location: A robot.

The robot served burgers and fries to patrons at the retro-themed diner on North Main Street.

"I liked it," said diner Johne Harte, of Angier. "It was pretty cool."

"It's definitely entertaining," said diner Alison Zieglmeier, who lives nearby.

The robot got 6-year-old Jackson Zieglmeier's order spot on after he ordered applesauce under a cheeseburger.

Once it gets to the table, a server hands the food to customers. Though in a pinch, you could grab it yourself.

The robot even says, "Please take your food."

"The waitress just gave it to us because I couldn't even reach it," Jackson said.

Service manager Jamie Terry said it's a tool to help servers, not replace them.

"Obviously everywhere there are shortages," said Terry. "So, it does help keep them more energetic because they don't have to take as many steps. We have a robot to help them. It gives the time for the servers to actually meet their guests and kind of you know, find out who they are, make some regulars. The food aspect -- they don't have to travel to come get the food."

Owner Alex Ramos said while they're not short-staffed, in a perfect world, they would like to have 15 to 20 percent more workers and that if you're shorthanded, you overwork the employees you have. This helps with that.

"We thought that it was perfect for what we were looking for, which is really to alleviate a lot of the burden and a lot of the stress from our employees but still be able to take care of our customers with a human presence," said Ramos. "It's kind of uncharted waters in a lot of ways, in terms of hiring in the labor market right now and just what's been going on for the last two years. So, we see the writing on the wall in a lot of ways with how difficult it is for us to get staff members when it used to be very plentiful, and we see our competitors and they seem to be in a lot of times worse spots than we are. We don't want to ever put our staff in positions like that. And we don't want to put ourselves in those positions."

The robot is named Servi and made by Bear Robotics. The robot is equipped with sensors so that it will not bump into anyone. Ramos said he is trying it out and likes what he sees. He said he may use them in other Hwy 55 restaurants that he owns.