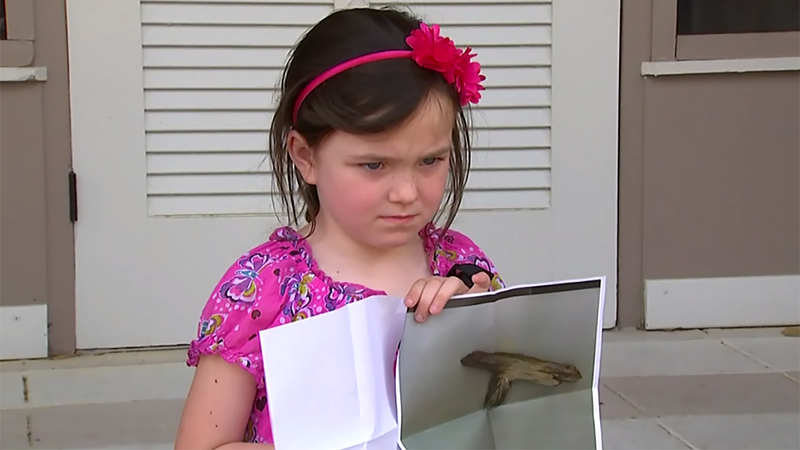 HOKE COUNTY (WTVD) -- A local mother is outraged after her 5-year-old daughter was suspended from school because of a stick that resembled a gun.

POLL: Should 5-year-old girl be suspended for playing with 'stick gun'? https://t.co/vQpNDwk1LZ

Caitlin Miller returned to school Tuesday after her one-day suspension.

It started Friday when her mother got a call from the principal about a playground incident. Caitlin explained that she and her two friends were using their imaginations, playing "King and Queen."

5 yr old Caitlin Miller returns home after her first day back from suspension over playing with stick that looked like a gun. #abc11 pic.twitter.com/DfzrY0zHEO

In this case, Caitlin was the guard protecting the royals and picked up the gun to imitate shooting an intruder into the kingdom.

Hoke County Schools said Caitlin posed a threat to other students when she made a shooting motion, thus violating policy 4331.

Caitlin Miller, 5, was suspended from kindergarten for playing with this stick.

"Hoke County Schools will not tolerate assaults, threats or harassment from any student. Any student engaging in such behavior will be removed from the classroom or school environment for as long as is necessary to provide a safe and orderly environment for learning," the school system says.

While Caitlin's mother says she understands the school's policy on the matter, explaining it to her 5-year-old was a different story.

"We know why it's bad. We watch the news, but then I have to tell my kid you're not allowed to play like that in school because people do bad things to kids your age," Brandy Miller said.

This is the playground where a 5 yr. old found a stick that school officials say resembled a gun. She was suspended for a day. #abc11 pic.twitter.com/L1niHRZt2u

Miller says Caitlin was alienated by her friends and teachers as a result of the suspension. She hopes that the school will issue some sort of apology to her daughter.