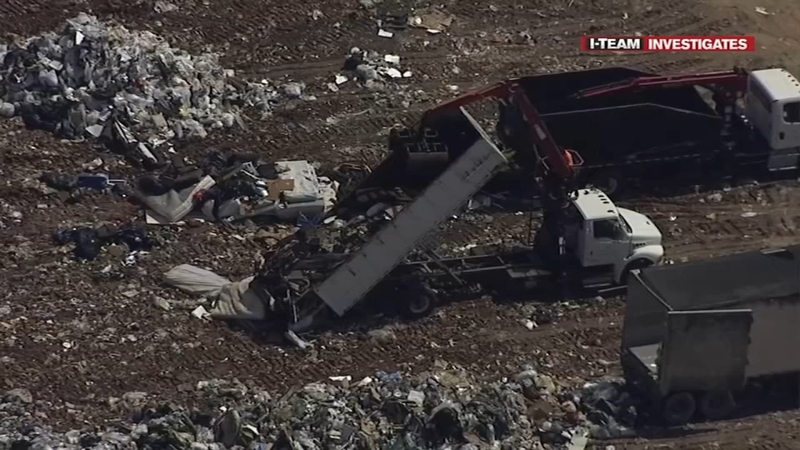 HOLLY SPRINGS, N.C. (WTVD) -- A holly leaf might smell sweet, but to some residents of Holly Springs, there is a nearby landfill that is anything but.

"Let's assume you let chicken rot in the kitchen for a couple of days," resident Donna Friend said. "That's what it smells like."

Many homeowners like Friend said that they were aware of the nearby South Wake Landfill, but for years the smell had never been a problem. Until now.

"You buy a home, and that's the single largest investment anyone makes in their life most cases," Friend said. "If you can't enjoy the space it takes up, why would you be happy? Nobody is saying shut the landfill down. That is not what we're looking for."

Three decades ago, few could envision a problem with a landfill placed several miles outside of Raleigh and in the small rural town of Holly Springs. Now, of course, the booming suburb is emblematic of the growth in population and growth in development.

An earlier I-Team investigation dug into the issue, and the initial attempts at alleviating residents concerns. Those included a foam spray and vapor pumping system.

More than 18 months since that report, it's clear the measures didn't work; data provided to the I-Team showed complaints surged more than 500% at some points last year - as many as 25 per day. Friend and her neighbors reached out to the Holly Springs Town Council for help, which then got the Wake County Board of Commissioners involved.

"We know this is a major problem, so we know it's not about barking up the right tree it's barking at every tree and we want to do what we can to protect the quality of life of people in that area," Matt Calabria, the Chair of the Board of Commissioners, said. "At the end of the day, the goal isn't to mathematically reduce the smell, it's is your life better or is it not. Did we get this problem solved for you or didn't we."

The county has since invested close to $4 million in two key improvements: first, instead of foam, crews haul in extra dirt to cover the open patches. Second, new technology to trap odors and gasses into wells, which could subsequently be transformed into renewable energy.

"Right now we're generating enough electricity to power 15,000 homes," Calabria said. "That goes back into the system so there are subsidiary benefits as well. Shipping trash elsewhere or building an expensive incinerator on the backs of taxpayers doesn't resolve all the problems with the current landfill anyway. This problem has to get solved. This is not a situation in which failure is an option."

Complaints are down drastically compared to before, but that doesn't mean they've gone away.

At the least, the county's more robust involvement is buying time with residents like Friend who would rather not move.