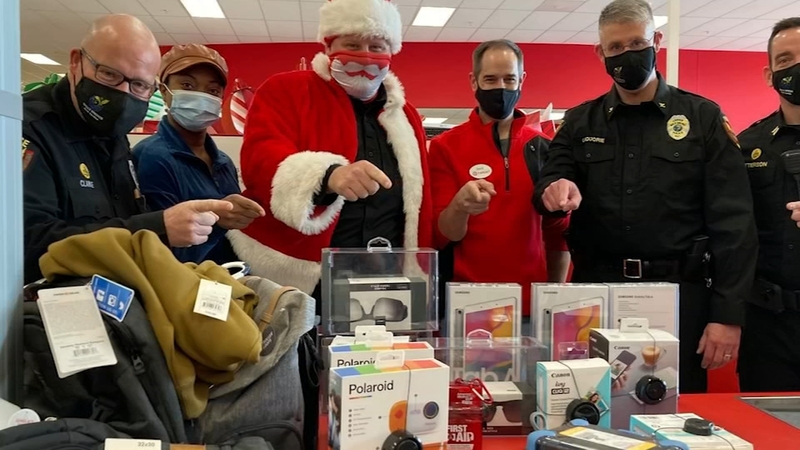 HOLLY SPRINGS, N.C. (WTVD) -- A suspected thief picked a bad time to go shoplifting at a Target Saturday morning, as Holly Springs Police were just arriving to meet with families for their annual Shop-With-A-Cop event.

"Unfortunately, there was a Grinch who tried to steal Christmas today... literally," read a post to the police department's Facebook page.


Mark Andrews, spokesperson for the Town of Holly Springs told ABC11, about ten officers were arriving at the Target at Holly Springs Towne Center when the suspected shoplifter ditched a shopping cart with nearly $2,300 in merchandise he had staged and was ready to steal.

"He was at the wrong place at the wrong time," said Arthur Clarke, Holly Springs Police Officer. "And when he saw all the officers out in the parking lot awaiting the kids and families to arrive for the program, I don't know what was going through his mind, but when he sprinted and I saw that video that gave proof - he thought it was an easy hit and he was very, very wrong about that."

Clarke said surveillance footage showed the suspect arriving to the Target just as the store opened at 7 a.m., then shortly before 8 a.m., as Clarke walked in, the suspect quickly left the store empty-handed.

"He ran to his car, he jumped in, he took off," Clarke said.

The suspected thief could not stop what the officers had come there to do.


Clarke said in all, 13 children were able to shop and pick out toys and presents for them and their families.

The generosity of the community that helped get them inside the store, Clarke said, could be seen pouring out of the children's hearts toward others.

"This kid looked at the price tag and said, well, 'I really don't need this because I can get three other toys for just this one toy and I can share my toys with my brothers and sisters'- and that is what the Christmas spirit is all about- it's about giving, not receiving," Clarke said.