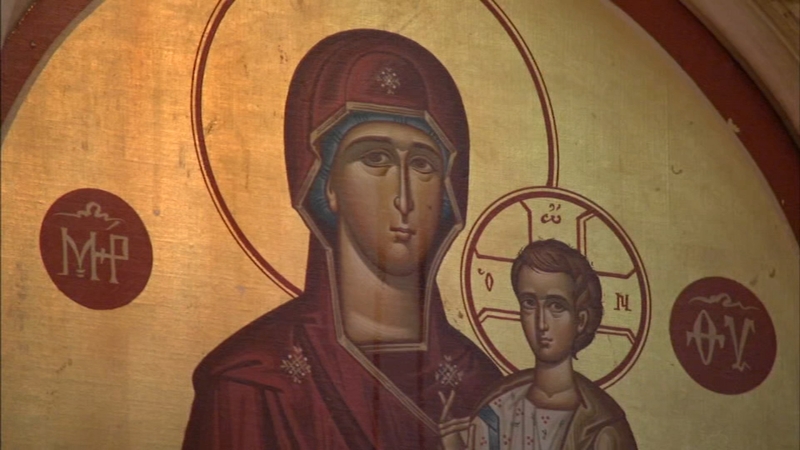 CHICAGO -- Some worshippers see a sign from God after a caretaker at Holy Trinity Greek Orthodox Church on Chicago's Northwest Side saw what looked like tears pouring from the Virgin Mary's eyes.

The caretaker noticed the shocking sight early Sunday morning, as she prepared for what could be one of the church's final services.

The church faces foreclosure and is due to go to bankruptcy court Tuesday morning. The community was in shock at the weeping icon.

"There's something she's trying to tell us, so we're just going to seal our lips and listen to what she has to say," said Father Nick Jonas.

Monday the residue of the oil-like substance streaming from the Virgin Mary's eyes remained, with many believing the oil has healing properties and that its origins are a blessing from God.

"I can't explain why she is tearing, but I do know as human beings we are usually crying for two reasons: either joy or sorrow," Fr. Jonas said.

A steady stream of visitors have been visiting the icon as well; about 300 people Sunday, according to the secretary of the church, and even more Monday. A nun from California traveled across the country to see the weeping icon in person as well.

"It's the type of thing you never forget and I always will be inspired by [it]," said Mother Angelina.

For the last year, the church has been fighting to remain at the corner of West Diversey Avenue and North Meade Avenue in the city's Belmont Central neighborhood. Holy Trinity avoided foreclosure late last year after a generous anonymous donation, but an issue with the money arose and forced the church to go up for sale again.

"Some people have come up to me and said, 'We'll mortgage our homes,'" said Stanley Andreakis, President of parish council.

The fate of the church remains unknown as officials investigate the apparently miraculous phenomenon.

Holy Trinity is the second oldest Greek Orthodox Church in the country and the oldest in the Midwest, at more than 100 years old. It has been at Diversey and Meade since the 1960s.

Church officials said a bank rejected a loan request after the church was not able to secure $1.6 million in pledges in an effort to save it. Another buyer has offered $2.5 million for the church, but that still means the community that worships there will need to find a new home.

They need roughly another $1 million to buy the church from the bank, and fundraisers have fallen short.

"We are hoping that we will relocate perhaps not immediately, but we are hopeful that something good will come out of this," Fr. Jonas said.