Honey bee crisis: How a $2M investment at NC State could save apples, blueberries, melons, peaches, and more 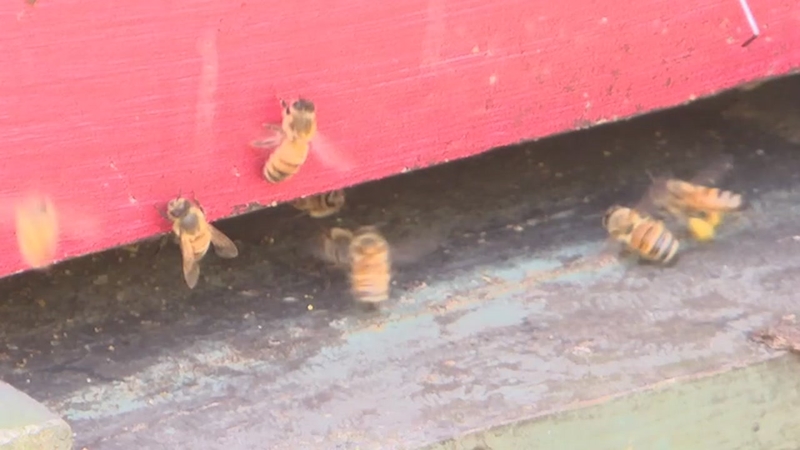 Honey bee crisis: How a $2M investment at NC State could save bees

RALEIGH (WTVD) -- The honey bee is an incredible ally of agriculture, but the bees are dying at an alarming rate.

Charles Heatherly with the North Carolina State Beekeeper's Association is worried about the future of honey bees.

"For the past 10 years, we average a 40 percent loss each year," Heatherly said. "Last year there (were) 50 percent losses."

Healtherly said that 75 years ago, there were 6 million colonies of bees in the United States. While we've seen a boom in human population nationwide, the same cannot be said for the honey bee, which has decreased by half.

"As far as North Carolina is concerned, we have an $87 billion agriculture industry which is heavily dependent on honey bees."

Heatherly said without honey bees we can all say goodbye to apples, blueberries, melons, peaches, and other produce that depends on pollination carried out by the bees.

"That's why we need this research facility, to figure out what's going on with the honey bees," Healtherly said as he stood with ABC11's Julie Wilson outside the current NC State research facility.

The current building is a research facility converted from a home built in the 1970's. The inside condition of the facility shows signs of distress. The building has never undergone renovations, which is evident when you see the signs of water damage on the main room's popcorn ceiling.

If House Bill 334 passes through the General Assembly, North Carolina State University could see a onetime sum of $2 million for a new facility.

The bill notes the need for the farm--particularly for farmers. The bill states that farmers rely on honey bees to pollinate 71 of the 100 crops that provide most of the world's fruits, nuts, and vegetables.

Representative Chuck McGrady is one of the primary sponsors of the bill. In a statement sent to ABC11, Rep. McGrady said:

"Honey bees are not thriving the way they were 25 years ago, and no one is sure why that is. Everyone is sure, though, that they are critical to our economy, specifically agriculture. Some of the best research being done in the nation is being done at North Carolina State University, but their facility outside of Raleigh is nothing more than a converted 1970's home that ought to be condemned. If I'm successful in getting funding, a new state-of-the-art facility would be built. H334 is not likely to pass as a stand-alone bill. I'm hoping funding for the facility will be included in the budget."