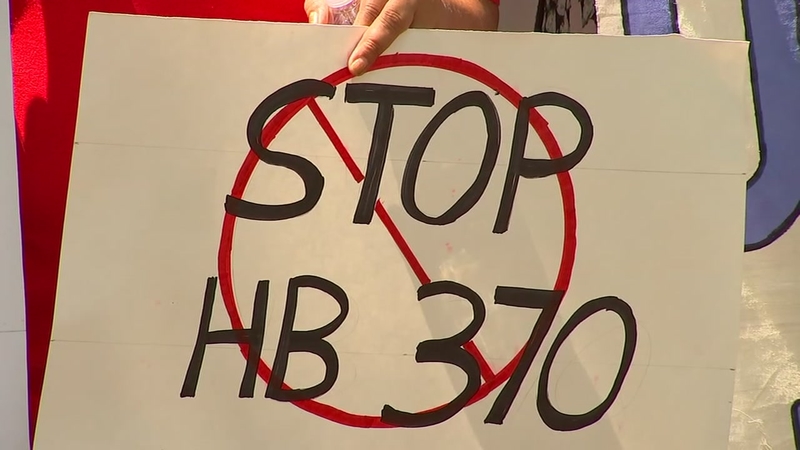 On Wednesday, several law enforcement leaders gathered in Raleigh to stand together against the bill.

One of the main concerns raised was about money.

Bill co-sponser says it would cost local jails an extra $100 a day to implement #HB370 legislation. The bill would require sheriffs office to determine if a prisoner, charged with any criminal offense, is a legal citizen. #ABC11 pic.twitter.com/G7snbM041m

Some sheriffs said they strongly feel the legislation in this bill is not about protecting communities, and some felt the purpose of the bill was to single out newly elected sheriffs of the seven largest counties in North Carolina.

HB370 would place a requirement on sheriffs, who would have to work with ICE and participate in its detainer program.

“They are on the fast track to remove us.” Sheriffs speaking out on HB370 saying they feel targeted for taking a stand and refusing to participate 287g program. That ICE program places a detainer on illegal residents once taken into custody. #ABC11 pic.twitter.com/rq8Mto3Zcw

Local law enforcement would be forced to check whether a prisoner is a legal resident when booked on any crime. If a sheriff doesnt comply - they would be removed from office.

Wake County Sheriff Gerald Baker joined McFadden from Mecklenburg County and Quentin Miller from Buncombe County to represent all of the sheriffs who oppose the bill.

"We as sheriff still have constitutional rights to do certain things," Baker said.

Last week, the North Carolina Sheriff's Association reversed its position to support the controversial immigration bill after it was updated to address concerns voiced by the association.

Rep. Brendan Jones, a Republican who represents Columbus and Robeson counties, said, "This is going to make these guys do what's right to protect the citizens of North Carolina."

A few of the sheriffs said that if the bill passes, they will abide by the law and enforce it, but they will do so unhappily.
Report a correction or typo
Related topics:
politicsncraleighcrimestate politicslawssherifficeimmigration
Copyright © 2022 WTVD-TV. All Rights Reserved.
TOP STORIES
2 to 3 inches of snow possible in Triangle
Voting bill collapses, Democrats unable to change filibuster
'We can't get any more': Stores struggle to restock shelves
Third arrest made in Black Friday shooting at Streets at Southpoint
Daniel Turcios shot 5 times after crash on I-440, RPD reports
NC legislature votes to further delay primaries until June 7
'He was special': Durham friends remember Andre Leon Talley
Show More
Cumberland County mom spins way to $500,000 lottery prize
Victim in fatal I-85 crash was just 3 months old
19-year-old military driver charged in wreck that left 2 Marines dead
Earnhardt Jr. to be inducted into NASCAR Hall of Fame
Raleigh man feels lucky to be alive after bullet found above his bed
More TOP STORIES News