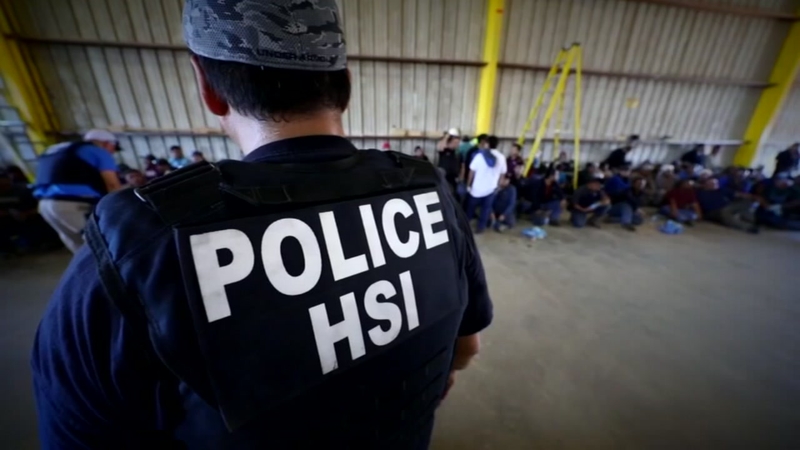 The North Carolina Sheriff's Association reversed its position on the controversial immigration bill HB370 after it was updated to address concerns voiced by the association.

Wednesday, the North Carolina Senate Judiciary Committee discussed an updated version of HB370. If passed, the bill would require local law enforcement to comply with ICE.

Activists from organizations, including El Pueblo, NAACP and the ACLU of NC, were among those packing the room to show their opposition to the bill.

Rep. Destin Hall, (R) 87th District, is a bill sponsor and said most sheriffs in the state are already complying with immigration officials.

"Unfortunately, a small number of sheriffs have decided recently they don't want to cooperate with ICE and that's why we have to move forward with this bill," Rep. Hall said.

The bill would require law enforcement to determine whether a prisoner is a legal resident when someone is charged with a criminal offense.

"Now the bill will require a judicial official to order that to be done in pretrial conditions of release if an individual has an ICE detainer issued against him by the federal government," Rep. Hall said.

While the changes made to HB370 successfully got the North Carolina Sheriff's Association to change its mind and support the legislation, those changes did not change the mind of Durham Sheriff Clarence Birkhead. He said he still opposes the bill because he disagrees with language used in the bill.

Rep. Hall said the legislation would only affect criminals. But some say it'll leave all undocumented immigrants in fear.

"Even if they're not 'criminals,' it spreads fear, especially for victims of hate crimes and domestic violence that they cannot call the police, cannot trust the police because they see the police as an extension of immigration enforcement," said Ricky Leung, of North Carolina Asian Americans Together.

"This is something that's going to cause, potentially dozens of lawsuits around the state from people who are being unconstitutionally detained for longer than they are able to," said Will Saenz, of El Pueblo.

Under the bill, if a sheriff doesn't comply, he or she could lose his or her seat.

The bill goes on to a second hearing Thursday, where lawmakers could vote on whether to move it forward to the General Assembly.

This is an official joint statement from organizations, including El Pueblo, ACLU of NC, Siembra NC:

Our state has become an epicenter for immigration raids and enforcement. Since the Trump Administration took office, North Carolina has experienced a 460% surge in ICE arrests, leading to thousands of detentions and deportations. Just this past week, communities across North Carolina were terrorized by ICE raids. We must remember that ICE is the federal agency that detains nearly 400,000 individuals a year in substandard conditions, terrorizes communities with large-scale raids, breaks apart families, and racially profiles Black and Brown communities.

Our local officials should not be collaborating with such a morally wrong and rogue agency. This is why HB 370 would be so devastating if it became law. The bill would enlist the sheriffs of every county into Trump's deportation force. It turns any police interaction into an immigration status check and cause of deportation. With sheriff deputies forced to work for ICE, HB 370 would dramatically increase detentions and deportations, causing long-term damage to North Carolina families and communities.

The Senate revisions to HB 370 have only made the bill harsher: it mandates the sheriffs detain people for 96 hours, twice the time in the House bill, eliminates basic protections for victims and witnesses of crime, and creates a removal process for democratically elected Sheriffs who do not assist ICE. Moreover, there is no doubt that this bill is still a Show Me Your Papers Law, mandating sheriff officers operate as ICE agents.

We are steadfastly opposed to any bill that forces our local sheriff's offices to become agents for ICE. We applaud the actions of many sheriffs across the state who have already taken steps to distance their office from ICE; and we condemn HB 370 as a retaliatory bill aimed at rolling back local policies that recognize the dignity of all our community, including immigrants.

We urge all elected officials to stand against North Carolina's House Bill 370, which would force collaboration between sheriff departments across NC and ICE, and lead to thousands more deportations."

"While Durham is not a sanctuary city, the City of Durham and the Durham Police Department recognize and value the diversity of the city. Accordingly, the department's primary responsibility is to ensure the safety and well-being of all persons within its jurisdiction, regardless of their immigration status.

Undocumented victims of crime are treated in a manner consistent with all Durham Police Department investigative and follow-up policies and procedures. Durham Police Department officers process unlawful offenses performed by individuals without regard to documentation status. Officers do not explicitly request identification during stops and calls that assumes subjects are not U.S. citizens."

ICE: (Says the agency does not advocate for or against specific legislation but is speaking about public safety consequences of non-cooperation with ICE)

"U.S. Immigration and Customs Enforcement (ICE) places detainers on individuals who have been arrested on local criminal charges and who are suspected of being deportable, so that ICE can take custody of that person when he or she is released from local custody. When law enforcement agencies fail to honor immigration detainers and release serious criminal offenders onto the streets, it undermines ICE's ability to protect public safety and carry out its mission.

A consequence of ICE being forced to make more arrests on the streets is the agency is likely to encounter other unlawfully present foreign nationals that wouldn't have been encountered had we been allowed to take custody of a criminal target within the confines of a local jail."