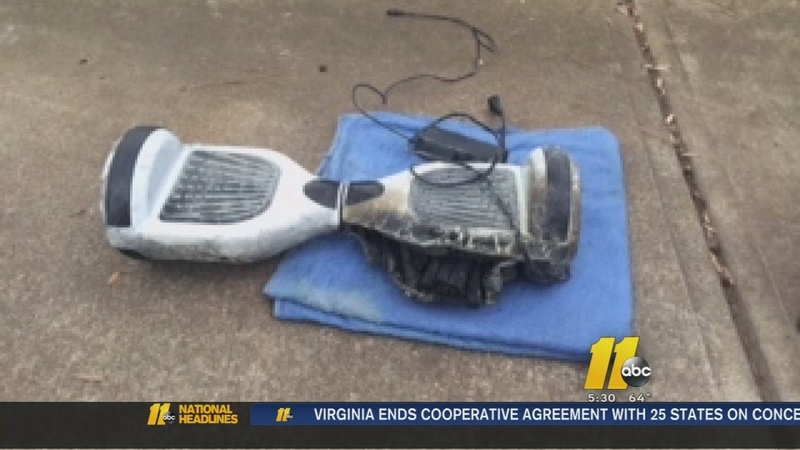 CARY (WTVD) -- The hoverboard is one of the hottest gifts this year - perhaps too hot. There have been several reports of the devices catching fire, and now a Cary family said they have learned firsthand of the possible dangers.

It was an early Christmas gift for this 16-year-old Cary girl who asked us not to use her real name, instead to call her Cindy. Her boyfriend bought her the Smart Balance Wheel, which is a type of hoverboard.

A hoverboard is a self-balancing scooter. Her boyfriend, Will, said he bought it from a kiosk at Crabtree Valley Mall in Raleigh. He says he paid more than $400 for the device.

Cindy said she enjoyed the hoverboard for a few days with no problems. On Sunday, during a dinner party at her home, she was charging the device. She says all of a sudden one of the guests noticed something unusual about the hoverboard.

"It started swelling and then smoking and then caught fire. It was like a fireworks show; it exploded," Cindy said. "Our friend tried to throw water on it which didn't help because of the lithium battery. My dad grabbed the fire extinguisher and sprayed it and then it lit again. He then sprayed again and while it was still smoking, my dad grabbed it and took it out in the grass and sprayed it again. It continued to smoke for about 20 minutes."

"I didn't realize how serious this could be," Cindy's mother said. "I didn't think about it exploding and catching fire in your home where you could lose everything."

I went to the kiosk at Crabtree Valley Mall where Will says he bought the Smart Balance Wheel, and I still saw many for sale. Two employees at the kiosk said they have had no problems reported to them.

One employee told me she used the hoverboards and charges the devices at the kiosk every day and has never had a problem. When I asked her who manufactured them, and if there was warranty information on them, she said she didn't know. The kiosk does have a sign on display that states no refunds.

Crabtree Valley Mall has taken action after learning of the incident.

As for this Cary family that is now dealing with thousands of dollars' worth of damage to their home after the fire, they just want others to realize the possible dangers that come with this popular gift.

"That's the concern if someone bought this and has it wrapped up for Christmas, it could really be a fire waiting to happen," Cindy's mother said.

There are several different brands of these hoverboards, with varying prices.

The best advice, if you have to have one, is do your research, see if there's any reports of problem with the particular brand you want. Before buying take it out of the box to make sure you at least can see the manufacturer and contact information for that company.