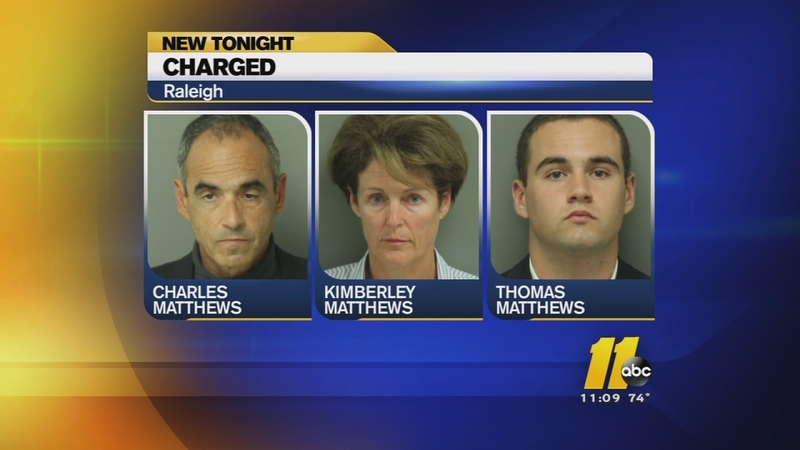 RALEIGH (WTVD) -- A mother, father, and their son face charges in connection to a deadly crash involving a Raleigh teenager in June. An ABC store clerk has been charged as well.

Dr. Charles Matthews, 59, and Kimberly Matthews, 52, are accused of aiding and abetting alcohol to minors.

Arrest warrants say their son Thomas Matthews, 18, bought a bottle of Jack Daniels from an ABC store in Cameron Village and four teens were allowed to drink it in the Matthews home on June 28.

One of the four - 18-year-old Johnathan Taylor - the son of a North Carolina Highway Patrol Trooper - died when his car went careening off Hunting Ridge Road near Tanbark Drive - about seven miles from the Mathews home.

Police say speed and alcohol played a role in the crash. Since then, Raleigh police and agents with Alcohol Law Enforcement have been looking into where Taylor got the alcohol found in his system.

The charges against the three members of the Matthews family are all misdemeanors.

Officials involved in the case declined to talk about specifics, but said the charges should serve as a reminder to parents - and anyone else - that if you allow someone to drink at your home - even if they aren't underage - and then allow them to drive - you could face criminal charges.

Wednesday afternoon, the clerk who sold the liquor, James Gordon Wilson, has also been charged in this case for selling alcohol to Thomas Matthews.

"He [Matthew] was not carded," said prosecutor Jeff Cruden. "He had some facial hair. He was wearing a tuxedo -- thought he could fool the person working behind the counter that he was of age. The person was fooled and sold him the alcohol so he was charged also."

Cruden said the entire case should serve as a warning.

"Actions have consequences. In a case like this it's such a tragedy," said Cruden. "An 18 year-old kid who has his whole life ahead of him, you know, gets killed in a car crash because he's had too much alcohol to drink. We always hope that people see this and think twice about doing the same thing."

The charges are only misdemeanors and likely won't carry jail time.