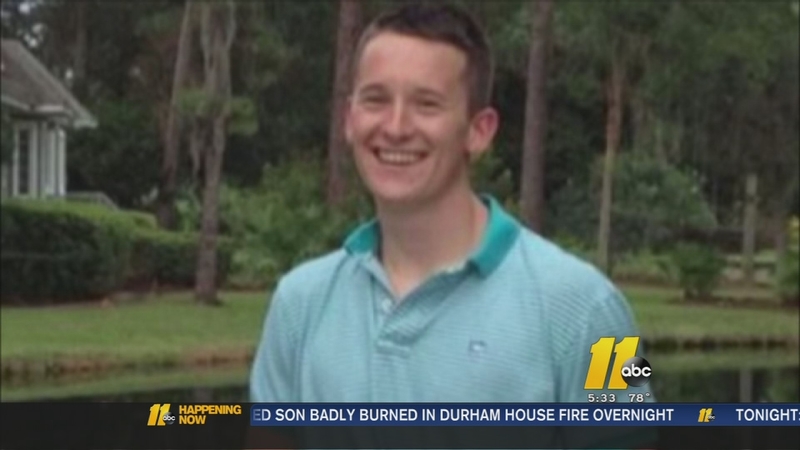 RALEIGH (WTVD) -- A state trooper whose son was killed while driving drunk is now suing the businesses who supplied and served alcohol at a wedding party the teen attended before the fatal crash.

The trooper and his wife, Greg and Carrie Taylor, filed the suit under a law that makes businesses that serve and sell alcohol liable for injuries caused when someone underage is served or an adult is overserved.

The statute of limitation on the "Dram Shop" law is one year, and the Taylor's suit was filed two days before that limit was up.

Their son Johnathan was 18 and had just graduated from Ravenscroft High School when his car slammed into a tree on Hunting Ridge Road near his North Raleigh home on June 28, 2014.

The teen was returning from a wedding party at the home of a prominent Raleigh physician, Charles Matthews.

Matthews and his wife, Kim, will be tried later this month on criminal charges of aiding and abetting underage drinking.

According to the Taylors' lawsuit, their son, along with the Matthews' teenage son, went to the ABC store at Cameron Village before the wedding.

The Wake County ABC Board, which operates the store, is also named in the suit because the Taylors claim a clerk there sold a fifth of liquor to the Matthews' son without checking his ID to learn he was underage.

The lawsuit alleges that the two boys and three other friends drank the fifth of liquor in ten minutes before attending the 7:30 p.m. wedding

It also alleges that after the wedding of Kim Matthews' daughter at the Matthews' multi-million dollar, inside the beltline home, there was a reception at which Johnathan Taylor and other teens were served alcohol by Parizade, which is a Durham caterer and restaurant. The owner of the restaurant, according to the suit, is a close friend of Kim Matthews.

However, the Taylors aren't just suing the caterer at the party. They are also suing Ridgewood Wine & Beer, the company they claim provided the alcohol for the party. The groom at the wedding is an owner and founder of Ridgewood.

Johnathan Taylor, although visibly drunk, continued to be served at the party according to the Taylors.

Their son's blood-alcohol level when he crashed around 11 p.m. was .20 -- two-and-a-half times the legal limit for adults.

Although the Matthews are not named in the suit, they could still face a wrongful death claim in civil court because the statute of limitations on that law is two years.

The Matthews have been charged criminally with aiding and abetting underage drinking. They are scheduled for trial at the Wake County Justice Center on July 27.