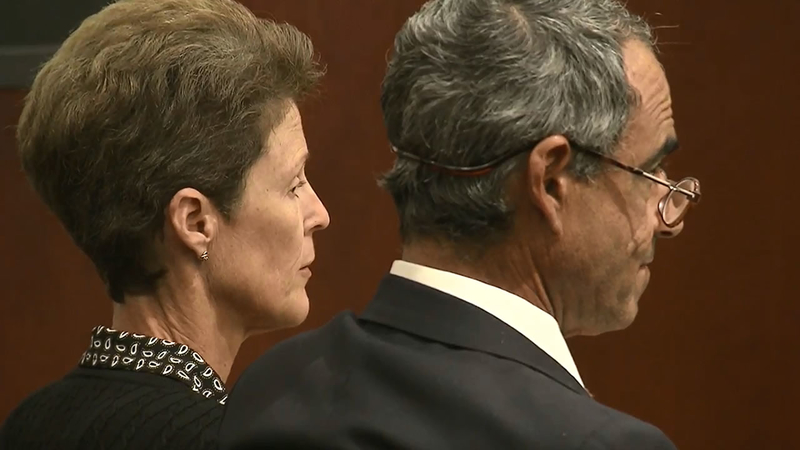 RALEIGH (WTVD) -- The mother of a Raleigh teen took the witness stand Tuesday and described rolling up on the crash scene where he lost his life.

Prosecutors allege 18-year-old Johnathan Taylor - the son of a state trooper - had just left a wedding reception at the home of prominent Raleigh physician Charles Matthews, 59, and his wife Kim, 52, when his car slammed into a tree on Hunting Ridge Road near his North Raleigh home on June 28, 2014.

Wiping away tears, Carrie Taylor said she and her husband learned their son was dead from officials at the crash site.

Charles and Kim Matthews are charged with four counts of aiding and abetting underage possession and consumption of alcohol. On Monday, their son Thomas pleaded guilty to underage purchase of alcohol in connection with the crash.

Prosecutors allege Thomas invited Taylor and other friends to join his family for the wedding. Before the event, they drove together to the Cameron Village ABC store to buy a bottle of Jack Daniels whiskey. None was of legal age to purchase alcohol, but the clerk allegedly sold a bottle to Matthews without asking how old he was or checking an ID for proof of age.

The group then drank the entire bottle together. Prosecutors also allege the teens were served drinks by caterers at the reception, but the attorney for the Matthews say they never gave permission for the teens to drink.

"You're not going to hear any evidence that they gave permission," said Hart Miles.

But in his opening statement, the prosecutor said pictures taken by a wedding photographer show the teens drinking openly within view of the Matthews.

Miles has tried to have the charges against the couple thrown out because he said the Wake County District Attorney's Office could have prosecuted others who provided alcohol to the teen but did not.

The DA's office did prosecute the clerk at the Cameron Village ABC, but the caterer and his bartenders at the reception were not prosecuted.

The judge said the Matthews have not proven they are being selectively prosecuted and ordered that their trial begin at a hearing last week.

On the witness stand Tuesday, Carrie Taylor told jurors that her son had just graduated from Ravenscroft High School and planned to attend the University of South Carolina to study chemistry.

She said that the last text message she sent her son "JT" on the night he dies was "Call me if you need a ride."

She later said she got a text saying "come pick me up," but she couldn't reach him.

"I started getting fearful when I couldn't reach him," said JT's father Greg Taylor, who also testified Tuesday.

He said the couple drove around looking for their son and rolled up on the crash scene. He showed his credentials as a state trooper to Raleigh police officers at the scene and was told what happened.

"I remember Carrie saying 'John is dead,'" said Taylor. "It's a haunting thing to hear your wife say."

Taylor said JT was his only son.

Carrie Taylor also testified that after she found out her son had died Kim Matthews told her she "saw him stumble" at the Matthews' house.

One of the other teens at the reception also testified Tuesday. Mary Anna Ergsh talked about driving to the ABC store to buy the Jack Daniels and how Thomas Matthews was happy he wasn't carded. She said the teens passed the bottle around until it was empty, but she testified nobody appeared especially inebriated, slurring words, or stumbling.

She said at the reception the teens began drinking wine.

"They were pouring and setting it out," said Ergsh. "Nobody asked for IDs or anything."

Asked if the teens were trying to hide that they were drinking, Ergsh said they did not.

"Everything was out in the open," said Ergsh.

Ergsh testified that after multiple glasses of wine, she and the rest of the group were obviously drunk.

"I was very drunk and passed out at that point," said Ergsh.

She remembered waking up in an ambulance and her parents were called. She said she learned of JT's death around 3 a.m.

Under cross examination, Ergsh said she and her friends did not ask the Matthews for permission to drink. She also said the caterers and bartenders made no attempt to card them.

Earlier this month, the Taylors filed a civil lawsuit under a law that makes businesses that serve and sell alcohol liable for injuries caused when someone underage is served or an adult is overserved.

The statute of limitations for individuals or trusts allows another year. And Thursday, ABC 11 dug up court documents showing that the Matthews' have now been added to the civil suit. It now also names The Royal Tenenbaum, a real estate trust set up as owner of the Matthews' home in Raleigh's Hayes Barton neighborhood. The tax value on the home is listed at more than $2,300,000.