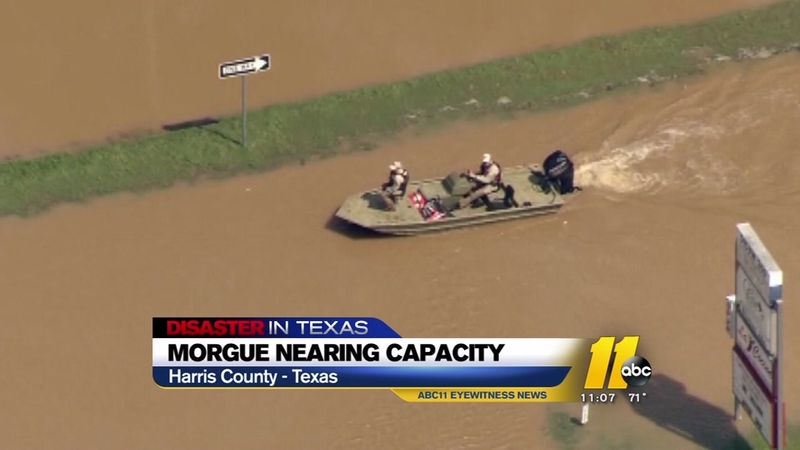 HOUSTON (WTVD) -- As floodwaters receded and rescuers searched waterlogged neighborhoods for more potential victims, Houston officials began turning their attention to finding temporary housing for those in shelters and getting enough gasoline for people to fill up cars - but also to the city's long-term recovery, which will take years and billions of dollars.

Help people affected by Hurricane Harvey by visiting redcross.org, calling 1- 800-RED CROSS or texting the word HARVEY to 90999 to make a $10 donation.

Authorities raised the death toll from the storm to 44 on Saturday. And the latest statewide damage surveys revealed the staggering extent of the destruction.

It raged through neighborhoods rich and poor, black and white, upscale and working class. Across Houston and surrounding communities, no group sidestepped its paralyzing deluges and apocalyptic floods.

"Harvey didn't spare anyone: The whole city is traumatized," said Lynnette Borrel, whose backyard pool filled with murky water and schools of minnows from Brays Bayou on the city's southwest side not far from downtown.

The Texas Department of Public Safety said more than 37,000 homes were heavily damaged and nearly 7,000 were destroyed, figures that did not include the tens of thousands of homes with minor damage. About 325,000 people have already sought federal emergency aid in the wake of Harvey. More than $57 million in individual assistance has already been paid out, FEMA officials said.

Harris County FEMA director Tom Fargione said the agency was looking for ways to house people who lost their homes to Harvey, with 32,000 people reported in shelters across Texas. Some evacuees had begun returning to their homes - the George R. Brown Convention Center, where 10,000 people took shelter, housed 8,000 evacuees late Thursday.

The priority is to get those who weren't able to return to their homes into some form of temporary housing, Fargione said.

"Right now, nothing is off the table. This is a tremendous disaster in terms of size and scope."

Gov. Greg Abbott warned Friday in an interview with ABC's "Good Morning America" that it could take years for Texas to "dig out from this catastrophe." President Donald Trump tweeted that there's still "so much to do" in Texas' recovery.

The block-by-block search of tens of thousands of Houston homes that rescuers began Thursday is expected to be completed by Friday. Fire Chief Sam Pena said his department had responded to nearly 16,000 calls since the storm hit Saturday, over 7,600 of them for water rescues.

Elsewhere, the loss of power at a flood-crippled chemical plant set off explosions and a fire, and the city of Beaumont, near the Texas-Louisiana line, lost its public water supply. The remnants of the storm pushed deeper inland, raising the risk of flooding as far north as Kentucky.

More than 200 firefighters, police officers and members of an urban search-and-rescue team fanned out across the Meyerland neighborhood looking for survivors or bodies. They yelled "Fire department!" as they pounded with closed fists on doors, peered through windows and checked with neighbors.

"We don't think we're going to find any humans, but we're prepared if we do," said District Chief James Pennington of the Houston Fire Department.

Unlike during Hurricane Katrina's aftermath in New Orleans, crews used GPS devices to log the homes they checked rather than painting neon X's on the outside. That avoided alerting potential thieves to vacant homes.

The blasts at the Arkema Inc. plant northeast of Houston also ignited a 30- to 40-foot (9- to 12-meter) flame and sent up a plume of acrid black smoke that stung the eyes and lungs. The blaze burned out around midday, but emergency crews held back because of the danger that eight other trailers containing the same compound could blow, too. No serious injuries were reported.

Although it has been downgraded to a tropical depression, Harvey is still expected to dump heavy rain on parts of Louisiana, Tennessee and Kentucky through Friday. Forecast totals ranged from 4 to 8 inches (10 to 20 centimeters), with some places possibly getting up to a foot (30 centimeters).

As the water receded in Houston, the nation's fourth-largest city, where officials expected the floodwaters to be almost entirely gone by late Friday or early Saturday, the greatest threat of damage shifted to a region near the Texas-Louisiana state line.

Some residents in Beaumont, Texas, began to get anxious after the city of nearly 120,000 lost water service when its main pump station was overwhelmed by the swollen Neches River. Officials said they were having difficulty bringing in enough bottled water to set up distribution stations because of flooded roads.

A procession of about 10 vehicles tailed a pickup towing a trailer packed with bottled water meant for emergency workers. The truck circled a downtown Beaumont block before Letorisha Hollier hopped out of the closest car.

"Give us a case!" Hollier shouted. Her persistence paid off. A firefighter handed her the water. She was the only tailgater to score a case.

In nearby Port Arthur, the Coast Guard used baskets and harnesses to pull people out of a neighborhood with chest-deep water. Many residents of second-floor apartments decided to stay.

Economists said the storm shut down everything from plastics plants to oil refineries to the Houston port - the second-busiest in the nation - which could affect the nation's economy.

With widespread reports of gas shortages, the head of the Texas agency that regulates the oil and gas industry urged drivers to wait three or four days to fill up their tanks. Panic buying is causing a run on gas and empty fuel pumps, Texas Railroad Commissioner Ryan Sitton said.

Energy Secretary Rick Perry said he would release 500,000 barrels of crude oil from an emergency stockpile in a bid to prevent gasoline prices from spiking.

Health experts warned that sewage in the floodwater could make people sick and that mosquito populations could explode in the coming weeks because stagnant water offers abundant breeding grounds.

With temperatures likely to climb in to the low 90s over the weekend, residents were warned about the dangers of heat exhaustion, especially for people who lost power or must toil outdoors.

Harvey initially came ashore as a Category 4 hurricane in Texas Aug. 25, then went back out to sea and lingered off the coast as a tropical storm for days, inundating flood-prone Houston.