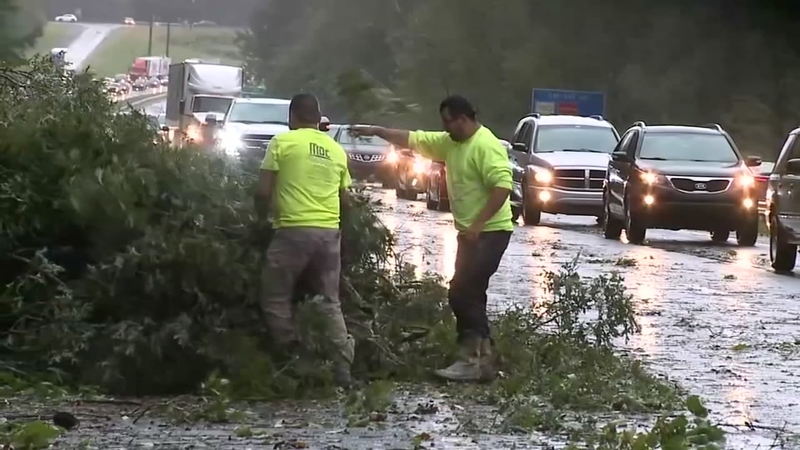 Michael remained a tropical storm through 11 p.m. Thursday night as it moved out of central North Carolina and pushed toward Virginia. Its rain tapered off, but high winds caused the biggest problems, knocking down scores of trees, leading to blocked roadways and thousands without power.

A cold front collided with the back edge of the storm, causing wind gusts, some of which approached 50 mph through the Triangle on Thursday night.

Andrew Phelan, a UNC senior, watched a tree fall next to his house on McCauley Street in Chapel Hill.

"I saw it fall and heard it and it was much quieter than you'd expect a tree falling to sound, and it was hanging on the power lines and we still had power," Phelan told ABC11's Josh Chapin. "It was really pretty incredible."

Phelan said he was surprised that class was in session.

"I was pretty surprised we were going to class today. It was shocking," he said. "The gust of wind was pretty intense. It was crazy. I was worried there would be more trees than that falling down."

The good news is that rain totals in the Triangle were slightly lower than forecast (about 2 to 4 inches) so most flash flooding should quickly recede.

Hurricane Michael is blamed for at least six deaths, including one in western North Carolina. The storm hit the Florida Panhandle on Wednesday afternoon and swept through Georgia before entering the Carolinas.

"Inland hurricanes and tropical storms are life-threatening and can do just as much damage as coastal storms," Cooper said.

"I want all North Carolinians to be on alert -- from storm surge on the coast to strong winds in the eastern and central parts of NC, to rain in the Piedmont and the west. Travel can be treacherous right now, so you should stay off the roads if you can," Cooper said.

In Raleigh, a stretch of Capital Boulevard was closed because of flooding. Roads in many counties were affected.

Michael was said to be the most powerful hurricane on record to hit Florida's Panhandle.

A tornado watch has been issued for parts of North Carolina and Virginia until 9 PM EDT pic.twitter.com/fOi4XmBpk6

Timeline of the storm

9 a.m.: Rainfall starts in the Sandhills