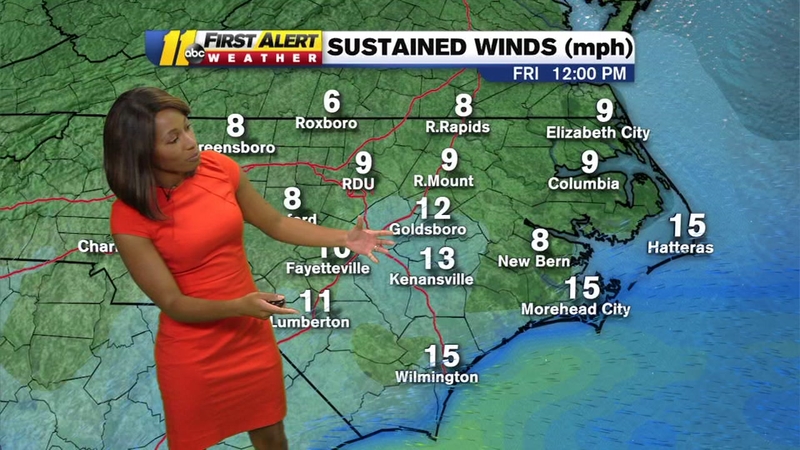 Hurricane Willa will bring rain to the Triangle

The U.S. National Hurricane Center said dangerous Category 3 storm hit near the town of Isla del Bosque in Sinaloa state. There were no early reports on damage.

Willa came ashore about 50 miles southeast of Mazatlan, a resort city that is home to high-rise hotels and about 500,000 people, including many U.S. and Canadian expatriates.

Alberto Hernandez, a hotel worker in Teacapan, close to where the storm made landfall, expressed confidence before it hit that the building would hold up. He and his son, who also works at the hotel, were staying on the job, though the rest of his family had left the area.

"We've had rain all day. There is nobody in the streets. Everything is closed," Hernandez said. "But not everyone wanted to leave, even though authorities made it clear that he who stays does so at his own peril."

A piece of energy from the remnants of Willa will move into the Gulf of Mexico and help spawn a new but non-tropical area of low pressure.

This new storm will strengthen as it moves up the East Coast late this week and become the first nor'easter of the season. Depending on the track of the storm, 1-2 inches of rain could fall over central North Carolina. And temperatures will be chilly - highs only in the low 50s on Friday will be 20 degrees below normal.

Cool, wet weekend ahead: A look at the 7-day forecast

Currently, the National Weather Service in Raleigh said parts of the Triangle would see up to 2" of rain, while parts of the Sandhills could see a bit more.

When the remnants of #Willa work through here Friday, they will bring some heavier rain. Here's the latest forecast from @NWSSPC BTW... 2 months from now and this storm setup would be a major snow maker. #ncwx pic.twitter.com/hVqB6MDf0G