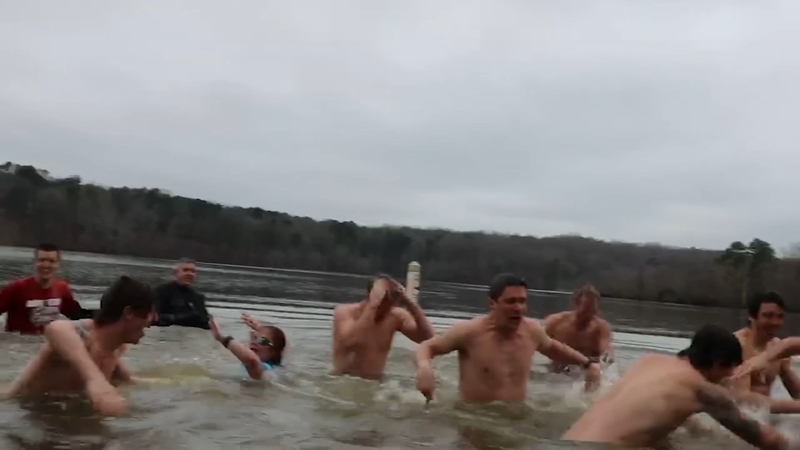 "We were really cold but we had a lot of fun," said Hurricanes defenseman Jake Gardiner.

"I talked to Ketih with Special Olympics North Carolina and we just came up with a plan to promote the polar plunge," said Gardiner. "Some of my teammates were nice enough to come and help out, and it was a fun day."

"It was fun," said Hurricanes goalie James Reimer. "I'm from Canada so I'm used to swimming in some cold water but no anytime you can help out and raise awareness. They train so hard, work so hard. Obviously it means a lot to Gards (sic) so if we can step in and help him out and we can. We're teammates, we're brothers and it's fun to do some stuff together."

Gardiner's brother-in-law Sam Chasin is a special olympian in Minnesota, and Gardiner is passionate about raising money for the organization. He reached out to Special Olympics North Carolina and they worked to film a promotional video for the polar plunge, the organization's major fundraising event of the year.

"I just texted the group chat and right away there were six, seven guys who right away were like yeah I'm into it," Gardiner said. "We're just regular guys but people look up to you and are big fans of the Carolina Hurricanes and if we can do little stuff like that to help out, help the community, raise awareness then why wouldn't we."

While Sam and Jake may live hundreds of miles apart, hockey bonds them.

"He's pretty proud," Gardiner said. "He wears number 51 as well. He talks a lot about his games and when he scores in floor hockey, how fast he is and how he plays center. He is good. He is a really good player and he'll for sure tell you."

Gardiner signed a four-year deal with the Hurricanes in September after leaving the Toronto Maple Leafs, and Chasin quickly became a '''Caniac."

"He switched over," Gardiner said. "He had basically every single thing Leaf's gear before and now he's got all 'Canes stuff. He's an awesome guy and their family is really close. I'm obviously a part of it now. The first five, six years he came to games we actually lost, so he was pretty upset about that. But we've been winning a lot lately when he's come. He's a good luck charm."

There are 18 plunges left in North Carolina this winter, with two taking place at Kure Beach and in Statesville on Saturday.