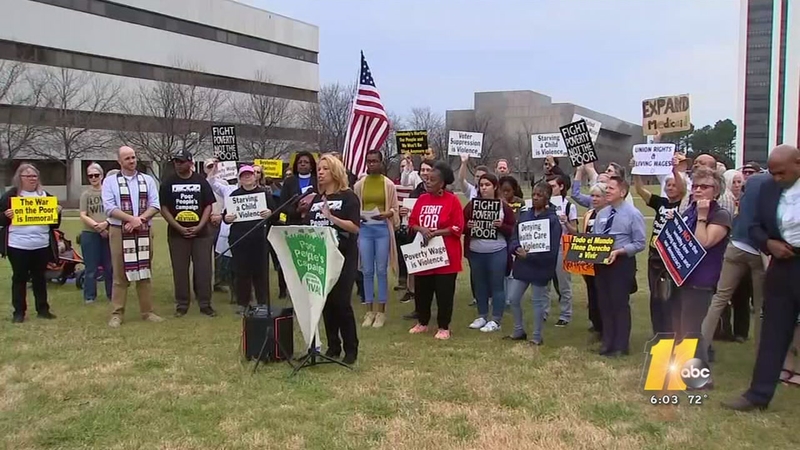 HOLLY SPRINGS, N.C. (WTVD) -- Officials with U.S. Immigration and Customs Enforcement are confirming to ABC11 the continuation of near-daily "targeted immigration arrests" of undocumented immigrants in North Carolina, including the reported detention of six people in Wake County.

El Pueblo, an immigration advocacy group in North Carolina, tells ABC11 that three of those detained in Wake County were arrested in Holly Springs, and additional raids Wednesday brought at least a dozen more immigrants into ICE custody from Charlotte, Durham and Burlington.

Wednesday's reported raids follow a busy Tuesday for federal law enforcement in the Triangle: ICE agents took custody of 27 individuals working at a manufacturing company in Sanford. According to ICE officials, 25 of those arrested were identified through criminal search warrants.

"ICE does not conduct any type of random or indiscriminate enforcement," Bryan Cox, a spokesman for ICE, asserts to ABC11. "The agency focuses first and foremost on criminal offenders and other public safety threats."

Emerson Yubimy Herrera-Alfaro, 19, of El Salvador, Juan Angel Murillo Ruiz, 34, of Honduras, and Mario Alberto Llamas-Hernandez, 37 of Mexico were all charged with illegal reentry of a deported alien.

Llamas-Hernandez, who was detained in Wake County, is alleged to have been previously deported subsequent to a felony conviction for cocaine trafficking, Higdon said. If convicted, he would face a maximum imprisonment term of
10 years, a $250,000 fine, and a term of supervised release following any term of imprisonment.

Herrera-Alfaro had been previously deported twice. He was found in Granville County. Murillo Ruiz, who was found in Sampson County, had been deported once. They face maximum penalties of two years in prison, a $250,000 fine and a term of supervised release following any imprisonment.