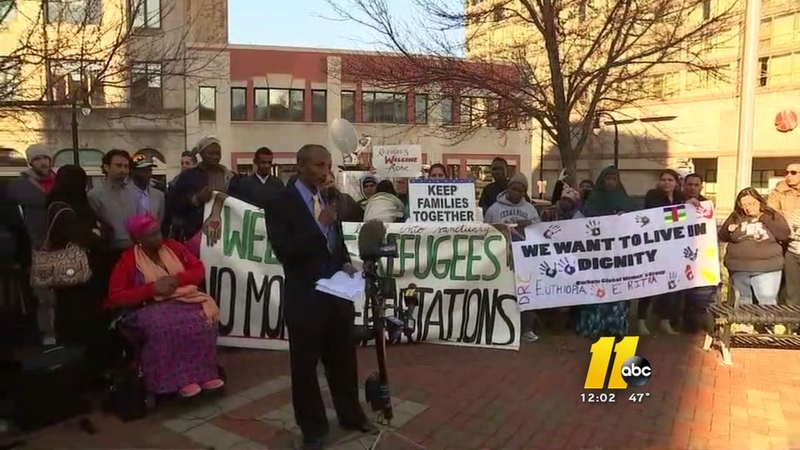 Groups including NC United for Refugees and Immigrants, The Raleigh Immigrant Community, Muslims for Social Justice, and Student Action with Farmworkers also participated.

Activists shared how their communities will be impacted by recent executive orders, including authorizing the building of a wall along the US-Mexico border and cracking down on illegal immigration.

"Look the wall is necessary. That's not just politics and yet it is good for the heart of the nation in a certain way because people want protection, and a wall protects," Trump said in an interview with FOX News Thursday.

President Trump is expected to issue an executive order aimed at restricting the flow of refugees into the U.S. A draft executive order obtained by the Associated Press shows he intends to stop accepting Syrian refugees and will suspend the United States broader refugee program for 120 days.

They are expected to include a temporary ban on people coming from some predominantly Muslim countries.

"We're going to have extreme vetting for people coming in to our country and if we think there's a problem, it's not going to be so easy for people to come in anymore," Trump said in an interview with Fox News Channel's Sean Hannity.

"These actions are not only a threat to certain individuals but the integrity of our entire community which has been, for decades, one of the many refuges throughout the U.S. for those fleeing war or persecution," Church World Service said in a statement. "We believe that any restriction on resettlement would be a gross violation of the human rights of refugees during dire times. Every step of the process would be impacted, people will be pulled off of planes, families who are anticipating their loved ones will be devastated, and communities that have planned for refugees to arrive will be left in limbo. No order on refugees has been signed yet, but if were one were to be we need to mobilize staunchly against it."