'$40 more than I would have spent normally': Sticker shock for Triangle grocery shoppers 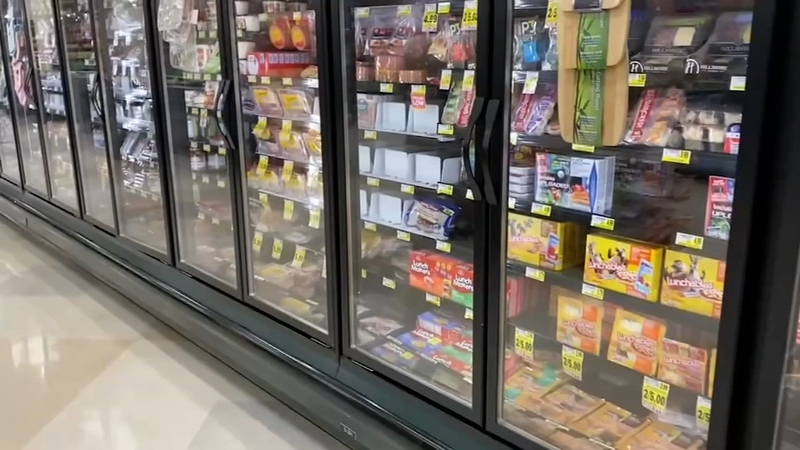 RALEIGH, N.C. (WTVD) -- Triangle shoppers are expressing their frustrations about how much more they're spending, after taking their carts down grocery store aisles or to the register.

"Oh my gosh, I can't believe it. I was just saying that to myself," said shopper Hyacinth Hunt. "This is about $40 more than I would have spent normally."

Inflation is at play and the latest data shows it shot up 7% from a year ago, which is the highest increase since June 1982.

Month-over-month, inflation increased .5% in December after rising .8% in November.

Supply chain issues were evident at nearly every grocery store that ABC11 stopped by.

ABC11 found bagged salad wiped out and an employee beginning to restock it at a Raleigh Walmart.

There was no pasta, frozen potatoes, or cream cheese at a Food Lion in north Durham. A refrigerator for chicken at the store was half-empty.

A nearby Harris Teeter was running low on milk.

There weren't many bread options at a Walmart in Brier Creek and orange juice was mostly gone at multiple stores.

People are fighting to find items while beginning to prep for the weekend's weather.

"For the weather, I think it's coming," said one shopper.

"I wanted to get ahead of it before everybody else ganged up on it this weekend," said shopper Bobby Colquitt.

Hunt was also gearing up for the wintry weather when she was hit with serious sticker shock.

"I'm going away so I want to make sure people in my house have food," said Hunt.

If you're also looking to get a jump start on grocery shopping for the weekend, be mindful some stores are slashing hours to deal with the labor shortage.

Many Harris Teeters are now closing at 9 p.m. and an Aldi in Garner has posted a sign on the door saying the store is closing at 5:30 p.m.

Robert Handfield, an NC State University supply chain expert, has been on calls with executives this week and unfortunately doesn't think there's any end in sight to this.

"We're going to continue to see shortages kind of be pervasive for a good part of 2022," Handfield said. "It's economics. The demand is greater than supply and the demand is going to go up."

He said COVID-19 disruptions are going to continue with Omicron being so pervasive.

"For some reason, certain kinds of beverages are seeing some shortages. We're fine on the paper towels it's just kind of weird stuff," Handfield said. "I think we're going to limp through 2022 and kind of get by as best as we can. We'll have to deal with shortages of stuff, certain kinds of products. Hopefully by Q3 or Q4 things will ease up and start to get back online."

Carlie C's has 27 stores in the Raleigh and Fayetteville areas and owner Mack McLamb said shipping is an issue, manufacturers and supplies having their own challenges, and COVID-19, as well as vaccine mandates, are also playing a part.

He said he has talked to wholesalers a lot and they have said it will correct itself in a few months. But in the meantime, he said he's had a rough time with crackers, cat food, bleach, and some forms of bread.

"There's just a lot of disruption in the supply chain so the supermarket channel, the grocery store channel has always been a very smooth running thing, but it was always on a just-in-time model," McLamb said. "You're having to refocus your attention to one challenge then another challenge but you know it's where we live and right now I suspect that for the next few weeks, we don't anticipate this not getting better