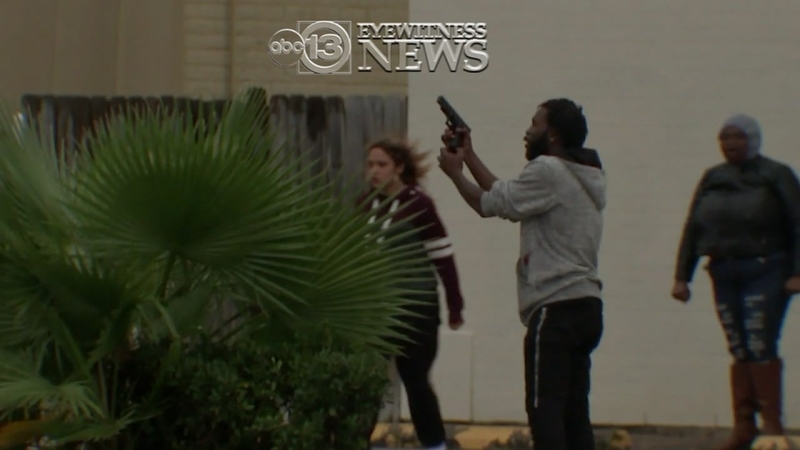 Shootout on Westheimer injures 2 in Houston

HOUSTON, Texas -- Timing is everything, and when a news crew from ABC11's sister-station KTRK opted to work out of a parking lot on Westheimer near Kirkwood Wednesday, the timing couldn't have been more frightening.

What he saw was the aftermath of a relatively minor rear end collision between a Jeep and a gray Nissan sedan. No one could have predicted what would happen next.

Two men emerged from the vehicles, and a few moments later, both had drawn pistols and were firing at each other in the middle of traffic.

Reporter Erica Simon describes the chaos as gunfire erupted on one of the busiest roads in Houston.

"I thought they had stopped shooting," said Garcia. He started recording after the last shot ended, but still, the men continued to threaten and wave the guns at each other, all of which is recorded on his remarkable video, the camera serving as an eyewitness.

"I hit the ground behind our truck," she said. "I called my husband to let him know where his wife was in case something happened."

After the gunfire ended, she walked around the truck, only to see a woman bleeding. A bystander across the street had been struck by one of the bullets, with a graze to her head.

"We tried to comfort her as best we could, and let her know an ambulance was on its way. A good Samaritan, an EMT, was applying pressure to her head to stop the bleeding," Simon said.

Through the lens of an eyewitness' smartphone, tense moments unfold on Westheimer as two men open fire on each other.

RAW VIDEO: Two men face each other with guns drawn after an accident on Westheimer
EMBED More News Videos

A shootout between two men involved in accident, ends with one man shot and an innocent bystander wounded

The woman was treated at a nearby hospital.

One of the shooters was wounded as well. Police believe he was struck in the chest. Despite the injury, he continued to walk with his gun raised against the other driver.

Police arrived quickly and took both men into custody. The wounded driver was taken to Ben Taub Hospital.

The woman shot was an innocent bystander. She was grazed in the head but has since been transported to the hospital. An off duty EMT came to her aid and applied pressure until medics got there. pic.twitter.com/w3gYQ0z5po

Other drivers caught in the traffic found themselves trapped in the gunfire, including Annie Ranck.

"I saw one man with a gun not 20 yards from me, and he was shooting his gun in all directions. I flashed my lights at other drivers. I wanted to warn people about what was happening," Ranck said.

One witness said he thought he was in Chicago, which is known for gun violence.

"It was crazy," said Garcia, and he sees it all as a reminder to others. "If you get into an accident, call the police, or drive to a gas station to wait. Don't start shooting at each other. A bystander who had nothing to do with this was injured. And it could have been even worse."