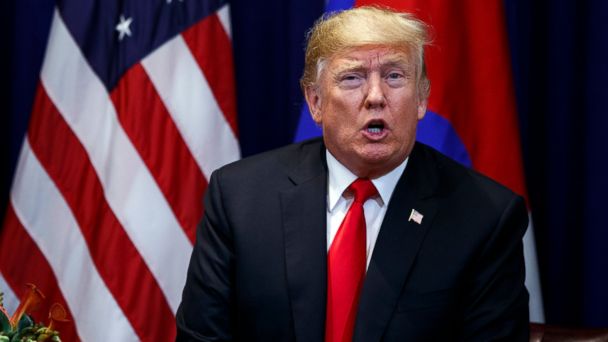 While visiting the United Nations this week, President Donald Trump maintained his tough line against Venezuela, telling reporters that "all options are on the table" when it comes to a response to the unfolding humanitarian and economic crisis.

Some have interpreted Trump's comments as leaving the door open for military action, but, back in Washington, senior American military leaders indicate there is no active planning for a U.S. military intervention there.

On the sidelines of the UN General Assembly in New York on Tuesday, Trump said his administration was "looking very strong at Venezuela" when asked about intervention.

Then, on Wednesday, the president said "all options are on the table, every one."

"Strong ones and the less-than-strong ones," Trump told reporters before a meeting with Israeli prime minister Benjamin Netanyahu. "And you know what I mean by strong."

"I just want to see Venezuela straighten out," Trump continued. "I want the people to be safe. We're going to take care of Venezuela."

The president's nominee to head U.S. Southern Command (SOUTHCOM) -- the combatant command responsible for military action in South America -- told senators there were no specific military plans being drawn up by that command.

"We are not doing anything other than normal, prudent planning that a combatant command would do to prepare for a range of contingencies," Vice Adm. Craig Faller told the Senate Armed Services Committee as his confirmation hearing on Tuesday.

Asked on Wednesday about possible war plans for Venezuela, Defense Secretary James Mattis responded flatly. "Well, in fact, we do have one, it's called a hospital ship that we're sending down there."

That hospital ship is the Navy's USNS Comfort -- one of the largest trauma centers anywhere in the United States.

Mattis announced in August that the ship would head off the coast of Colombia to provide urgent medical care for Venezuelan refugees. SOUTHCOM has since said the ship will also makes stops off the coasts of Honduras, Peru, and Ecuador this fall.

An estimated 3 million Venezuelans have fled their country in the wake of a devastating economic crisis that has caused shortages of food and medical supplies. Over one million of those refugees have crossed the border into Colombia, creating what Mattis called at the time a "destabilizing impact" on the country.

"It is an absolutely a humanitarian mission, we're not sending soldiers, we're sending doctors," Mattis told reporters in August. "And it's an effort to deal with the human cost of [Venezuelan president Nicolas Maduro] and his increasingly isolated regimes."

Trump first publicly mentioned a military option for Venezuela in August of 2017, but the administration has instead focused its efforts on humanitarian aid and economic sanctions.

Speaking at the United Nations on Tuesday, Vice President Mike Pence announced an additional $48 million in U.S. aid to countries in the region affected by the Venezuelan refugee crisis. Meanwhile, in a bitter feud with the U.S., Maduro has refused all American assistance.

Also this week, the Treasury Department announced that it was targeting four individuals close to Maduro, including his wife.