The South Carolina congressman is one of the few 1960s civil rights movement leaders still in elective office today.
AP
By Lisa Mascaro 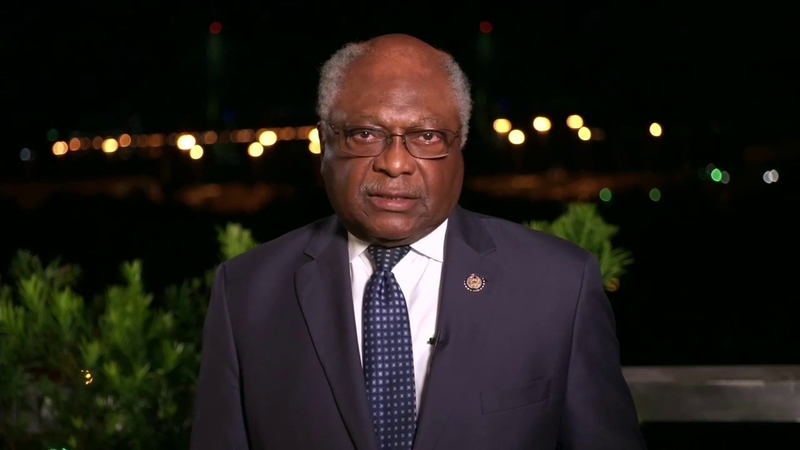 WASHINGTON -- In October 1960, a young James Clyburn gathered with other students and the Rev. Martin Luther King Jr. as frustrations mounted over civil rights protests in what was becoming a tumultuous, dangerous year.

John Lewis was there. Marion Barry, too. The one-hour meeting at Atlanta's Morehouse College stretched to 4 a.m. Clyburn, who said he had not "bought into nonviolence," emerged to view it as a valuable tactic in the struggle, and a King "disciple."

Clyburn is now the highest-ranking Black lawmaker in Congress, the House Democratic whip, and with so many of his contemporaries gone, one of the few leaders of the civil rights movement still in elective office today.

He brought that connection to the virtual Democratic National Convention on Monday, speaking to a country in a new, contentious chapter in its pursuit of racial justice and to a party on the verge of nominating the first Black woman for vice president.

The 80-year-old from rural Sumter County has lived and worked through the nation's swings of history, and remained an often quiet political force throughout. Earlier this year, he used his sway to help deliver his home state for Joe Biden. It was a moment that revived the former vice president's campaign and set him on a path to the nomination he is due to receive later this week, along with running mate Sen. Kamala Harris of California.

During an earlier interview with The Associated Press, Clyburn said, "This country moves like a pendulum on the clock."

Whether it shifts again, he said, depends on "how we participate in November."

As the DNC kicks off, House Speaker Nancy Pelosi calls back House members to tackle the postal service crisis.

Clyburn is pressing many of the same issues he has for decades - particularly focusing on Black voting rights ahead of the election. Clyburn is also a close confidant of House Speaker Nancy Pelosi and has been a prominent congressional critic of Trump.

"Sixty years ago, 19-year-old Jim Clyburn was seeking a better future for himself and those around him," said Bobby Donaldson, a professor of history at the University of South Carolina who heads the Center for Civil Rights History and Research. "So it's ironic now, 60 years later, two generations later, he is now one of the architects of the very nation that he sought to be aspiring toward."

The son of a reverend and a beauty shop operator, Clyburn early on wanted to pursue a career in public service, only to be warned off by teachers as not the place for a Black boy from the South, he recounts in his autobiography, "Blessed Experiences: Genuinely Southern, Proudly Black."

As a South Carolina State University student he quickly engaged in the 1960 student boycotts that sparked the civil rights movement. Within weeks of the Greensboro, North Carolina, lunch-counter sit in, Clyburn's classmates organized a 1,000-student march in rural Orangeburg, South Carolina, with hundreds arrested, jailed in an outdoor stockyard. A decade later he made his first run for elective office.

He describes racial disparities that resonate to this day - boarding an airplane in "the most expensive suit I ever bought in my life," flanked by the Capitol Police security detail that are assigned to House leaders. The flight attendant mistook him for a prisoner transport, he said.

Clyburn is seen by many as a political kingmaker in South Carolina; he earned Bill Clinton's wrath for tipping the scales to Barack Obama over Hillary Clinton in the state's 2008 primary. Clyburn was instrumental in positioning the Palmetto State after Iowa and New Hampshire for the early vote.

This time around, Clyburn said, he didn't want to just back Biden. He wanted to ensure "the lift he needed" for the campaign.

"Joe Biden was limping along." Clyburn told the AP. "What we had to do was to do something that would allow him to take on the aura of a winner."

Clyburn said he recorded radio ads and calls to flood South Carolina with his endorsement. Some Democrats downplay the influence, arguing South Carolina's robust Black electorate was already inclined to vote for Biden.

But Democratic strategist Antjuan Seawright, an ally, said Clyburn's push gave Black voters the assurance "their vote would be worth it."

A younger generation of rising leaders both in South Carolina and in the halls of Congress is eager for the older one to move on. Clyburn, Pelosi and Majority Leader Steny Hoyer have held the top three leadership positions in the House for more than a decade.

Clyburn was long seen as possibly stepping aside if Hillary Clinton had won in 2016, much the way Pelosi has since said she was ready to do. Now they all seem poised to win their own reelections and remain - regardless of who wins the White House in November.

Biden's campaign is leaning into Clyburn's longtime priorities, including his signature "10-20-30" formula to spend 10 percent of federally appropriated funds in places where 20 percent of the population or more has spent 30 years in poverty.

Clyburn's decade-long push for rural broadband - so critical now during the coronavirus pandemic for remote education, employment and health care - is gaining fresh currency, approved as part of an infrastructure bill and being eyed as part of a COVID-19 aid package.

One of Clyburn's longtime colleagues in the civil rights movement and Congress was Lewis, who died in July. Clyburn's last conversation with the Georgia congressman on the House floor was discussing Black Lives Matter and the protest movements now pushing for police reform.

Clyburn said they talked about "all of this yelling about 'defund the police'" and his own worry that it would undercut the movement's effectiveness.