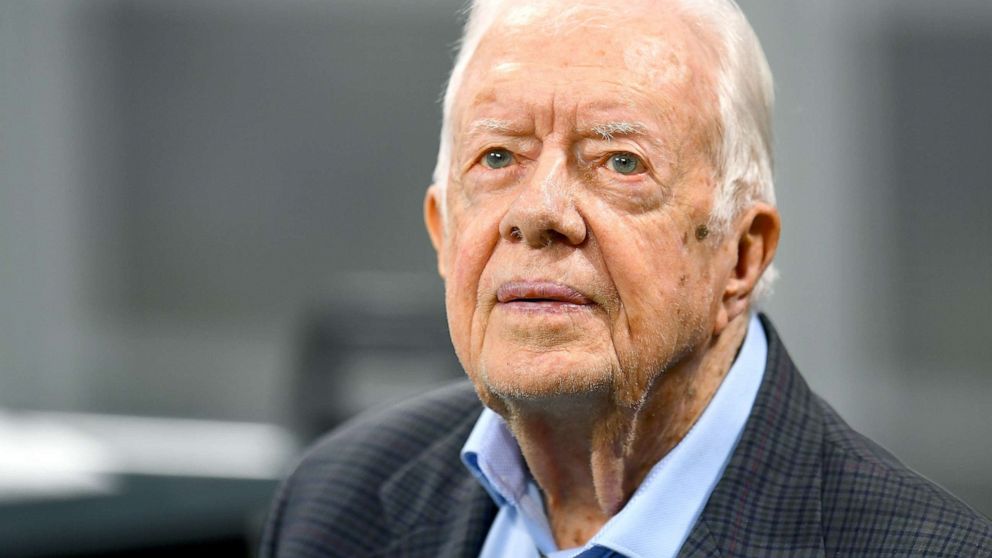 Jimmy Carter fell at his Georgia home on Sunday, but after a brief trip to the hospital the 39th president of the U.S. says he "feels fine." The fall did require Carter to get 14 stitches.

"Former U.S. President Jimmy Carter had a fall today at his home in Plains, Georgia, that required stitches above his brow," the Carter Center said in a statement. "He said he feels fine and wanted everyone to know that he and Mrs. Carter are eager to be at Habitat for Humanity's Jimmy and Rosalynn Carter Work Project in Nashville, Tennessee, Oct. 6-11, starting with the opening ceremony this evening."

This is the second fall for the 95-year-old president in recent months. In May, he underwent surgery after breaking his hip while preparing to go turkey hunting at his home.

Carter commented on the fall at the Habitat for Humanity event, explaining, "First of all, I want to explain my black eye. I got up this morning at home in Plains, getting ready to go to church, 'cause right after that we had a family reunion, and then we were coming to Nashville. And I fell down and hit my forehead on a sharp edge, and had to go to the hospital."

"They put 14 stitches in my forehead and my eye is black as you noticed," he added.

He said he had no plans to miss the charity event, though: "I had a No. 1 priority, and that was to come to Nashville to build houses."

Carter was also diagnosed with metastatic melanoma in his liver in 2015 that had spread to his brain. Carter announced about six months after the diagnosis that he no longer needed cancer treatment.

He turned 95 on Tuesday. He has already lived longer than any other president in U.S. history.

Carter served as governor of Georgia from 1971 to 1975 and then defeated Gerald Ford in the 1976 presidential election. He would serve just one term, however, losing to Ronald Reagan in the 1980 race. He also faced a tough fight from the left in the form of Ted Kennedy.

He was defeated in a landslide, 489-49 in the electoral college, and carried just six states and Washington, D.C.

The former president left politics after losing his reelection bid and threw himself into charity work. He started the Carter Center in that pursuit and has been the leading face of Habitat for Humanity for decades.

Can you get infected again after recovering from COVID-19?
U.S. looking into banning TikTok
Kanye West's Yeezy? The Girl Scouts? Hedge funds? All got PPP loans
'I believe in white power': Woman charged in face mask dispute
Was a COVID-19 tracking app secretly added to your smartphone?
Show More
CA teacher who allegedly coughed on child in Yogurtland loses job
Woman turns 100 years old, beats COVID-19
Pedestrian hit, killed in Johnston County
What to do if your dog is bitten by a snake this summer
Burger King serving up $1 9oz mini shakes
More TOP STORIES News