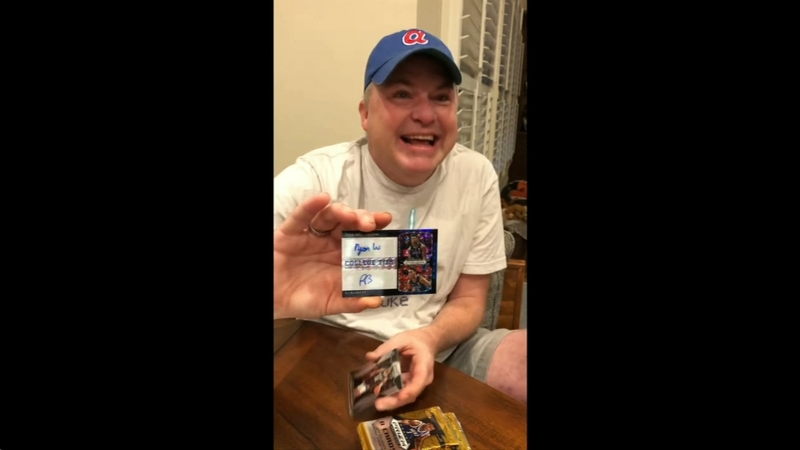 Jimmy Mahan has lived all over the state of North Carolina, but his blood runs Kentucky blue.

Mahan is actually a Kentucky Colonel, the Bluegrass state's version of the Order of the Long Leaf Pine, such is his devotion to his home state.

He's also a massive UK and sports fan in general and a prolific collector.

I probably don't need to tell you that Kentucky and Duke fans don't really see eye to eye.

There's the bragging rights constantly being debated as it pertains to being college basketball's kingpin program and there was of course that Laettner guy making that shot of some importance back in 1992.

That all adds extra poetry to the fact that Mahan recently struck Blue Devil gold.

While streaming himself on Instagram (@kentuckybasketballcards) opening some packs of Panini hoops cards, he came across a 1/1 autographed card of both Zion Williamson and RJ Barrett. He knew immediately what he had found. "I felt like I was 8 years old on Christmas morning," he told me.

As a massive collector, Jimmy knew the card was exceptionally valuable. As someone who's also devoted his life to helping out children and young adults, he shortly also knew what he wanted to do.

While traveling to have the card "graded" and valued, he decided the proceeds from the card's sale wouldn't be staying with him. Instead, he would donate the money to the Crossnore School and Children's Home.

Mahan had worked for awhile at the home as sort of a crisis management guy, a problem solver, so he knows the needs of the kids there first hand. Kids who've been neglected or abused, even abandoned.

"It's a great story, but is the ending 'Jimmy gets more stuff?' I don't need more stuff. I know I was born on third base with what I've been given in life and these people haven't even gotten out of the dugout," Mahan said.

He sold the card on eBay in early November for north of $15,000. All that money will go directly to those who need it at Crossnore.

"I love Zion and I love basketball and I love Kentucky, that's great, but this can help and immediately change a kid's life. That's way more important," said Mahan.