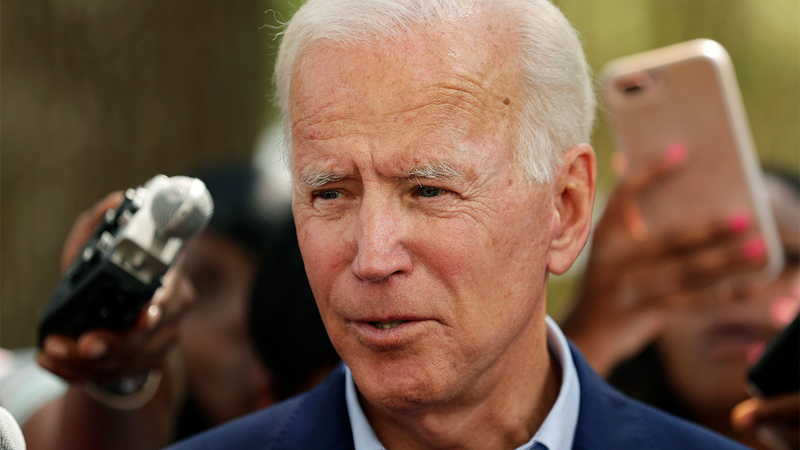 HOUSTON -- Democratic presidential candidate Joe Biden is shrugging off thinly veiled criticism from younger rivals that he is too old for the Oval Office.

The 76-year-old former vice president told reporters Friday that he'll prove his fitness through the campaign, even asking one questioner jokingly: "You wanna wrestle?" And he pledged to release his medical records "when I get my next physical" before the Iowa caucuses begin the voting process in February.

"There's no reason for me not to release my medical records," Biden said.

Age has been an undercurrent of the Democratic primary for months, with Biden, 78-year-old Bernie Sanders and 70-year-old Elizabeth Warren leading the crowded field vying to take on President Donald Trump, who is 73.

The issue spilled into the open Thursday, when 44-year-old Julián Castro used the third Democratic primary debate to suggest during a health care discussion that Biden was confused about his own proposals.

"Are you forgetting what you said two minutes ago?" Castro asked, wrongly accusing Biden of misstating how people would secure health insurance coverage under his proposal for a Medicare-like "public option" plan to compete alongside private insurance.

Cory Booker, who is 50, added after the debate in a CNN interview that there are "a lot of people who are concerned about Joe Biden's ability to carry the ball all the way across the end line without fumbling."

Both Castro and Booker are lagging far behind the top tier and looking for ways to gain a toehold in a campaign dominated by septuagenarians.

Biden said Friday, as he has before, that his age is a legitimate issue for his opponents to use and voters to consider. But the Thursday debate marked a new turn with Booker and Castro directly raising the issue.

But Biden has faced the most persistent whispers about his age, particularly when he misspeaks when campaigning - a circumstance his aides note has been a well-known part of his decadeslong political career. Near the conclusion of Thursday's debate, Biden offered a stem-winding answer to a question about structural racism, at one point saying parents could help teach their children language skills by using a "record player."

Said Booker: "I don't remember the last time I saw a record player. ... But there are definitely moments where you listen to Joe Biden and you just wonder."

Former Vice President Joe Biden was asked about his biggest professional setback during the Democratic debate on Sept. 12.

Booker told CNN that he wasn't saying Biden is too old to be president, just that he wants a nominee who can excite the full spectrum of Democratic voters.

Castro insisted after the debate that he wasn't alluding to Biden's age at all when he asked Biden multiple times whether he was forgetting the details of his own health care proposal. The audience at Texas Southern University seemed to reach a different conclusion, reacting with gasps, groans and jeers at Castro's questioning.

Biden's aides on Friday called it a "low blow."

The candidate himself avoided that characterization and didn't mention Castro or Booker by name.