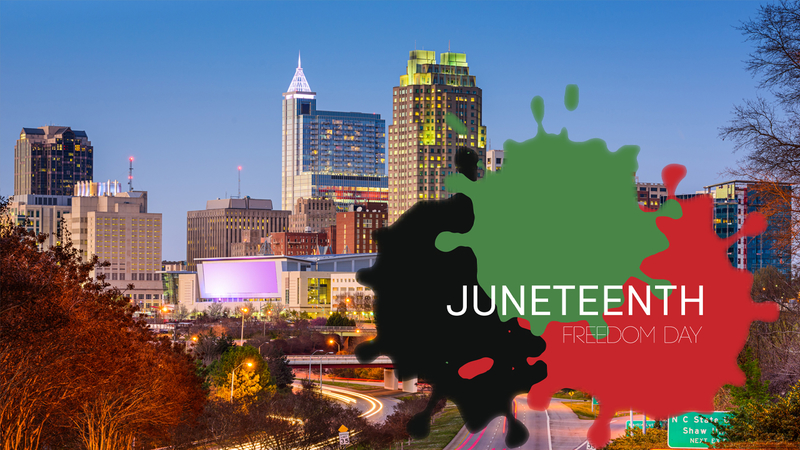 Chairman Greg Ford made the announcement on Twitter over the weekend by thanking Commissioner Jessica Holmes for her lead in helping to champion the effort.

#Juneteenth will soon be a holiday in #WakeCounty.
I can confirm the entire #WakeBOC intends to vote for this proclamation at our July 6 meeting.
Both timely and overdue, we hope state and local governments will follow this example. Thank you @JessicaHolmesNC for the lead!#NCpol pic.twitter.com/YSWkBBAORK

"We could have simply proclaimed Juneteenth as a county holiday and done a resolution. That simply would have been a piece of paper with no material impact," Holmes told ABC11. "As far as I'm concerned, it should have been done prior to Juneteenth. But because we wanted to create real change and actually make it county holiday, that is why we decided to bring it forward at this point in time."

In a news release Monday evening, Wake officials said the county is the first in the state to declare Juneteenth a paid holiday for its employees.

"Juneteenth is not only black history. It is American history," Holmes said in the written statement. "This board is committed to addressing systemic and institutional racism and discrimination. Recognition of Juneteenth is one step of many that we plan to take to do our part, and I hope other counties and municipalities will follow our lead."

Juneteenth, sometimes referred to as Freedom Day or Emancipation Day, stems from the day the last slaves were freed on June 19, 1865 in Galveston, Texas. The date comes two and a half years after President Abraham Lincoln signed the Emancipation Proclamation. News of the president's signing took that long before it reached slaves in Galveston.

Many companies across the United States began to recognize Juneteenth publicly this year and provide it as a paid holiday to their employees.

Across the country, 47 out of the 50 states recognize Juneteenth as a holiday. Hawaii, North Dakota and South Dakota currently do not recognize or celebrate the day.

Following Chairman Ford's tweet, Raleigh Mayor Mary-Ann Baldwin tweeted her support to say the city would be doing the same.

We will be doing the same in Raleigh.

"We talk about freedom in America and I think it's very important that we signify this day and make it a paid holiday," said Raleigh Mayor Pro-Tem Corey Branch.

Both Raleigh and Wake County government plan to count the holiday as a paid one beginning in 2021.

As is the case for several other recognized holidays, Juneteenth will be observed on a Friday if the holiday falls on a Saturday and the Monday after the holiday if June 19 occurs on a Sunday.

Currently, the state of North Carolina recognizes Juneteenth, but not as a paid holiday.