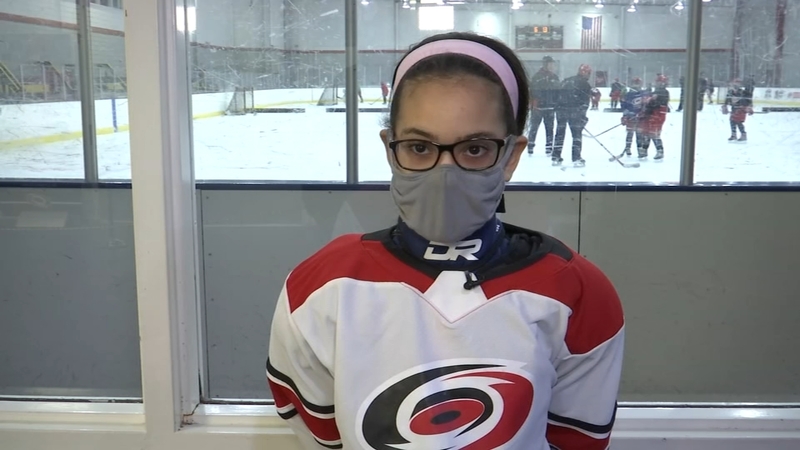 RALEIGH, N.C. (WTVD) -- As hockey continues to grow in the Triangle, players, coaches and fans are making it known that the sport is for everyone.

One Junior Canes player is proving that firsthand after earning a scholarship from the Black Girl Hockey Club.

Rayla Wilkes is an 8-year-old on a mission.

Rayla started playing hockey when she was 5 and wants people to know anyone can participate.

"These girls, they see women, which is great," said her mother, Amanda Wilkes. "They see women and they're doing what they're doing, and then a girl of color sees a girl that looks like her doing exactly what she wants to do, and it just makes you feel like she can do it, too. I think representation is really, really huge."

Rayla wears No. 55 in honor of her favorite player, Kelsey Koelzer, who was the first Black player to be the first overall pick in a professional North American hockey league draft and became the first Black head coach in NCAA ice hockey history.

"I think that's really cool, because I haven't seen many dark players in hockey," Rayla said. "I think it's really cool for girls like Kelsey to play."

Rayla's mom said she and her daughter are doing what they can to let minorities know that this "amazing" sport can be for them, too.

"I think it's important, because I feel like minority groups don't feel like hockey is for them or feel like they're welcomed in the sport," Wilkes said. "I want to show them that that's not the case. I want to support them, bring them and show them what an amazing sport this is, and help them highlight and be a resource."

Earlier this month, Rayla won a $1,000 scholarship from the Black Girls Hockey Club, an organization that unites Black women in the hockey community. The scholarship is a response to some of the financial gatekeeping that comes with hockey.

"One thing that really stood out in her application was this desire to be able to travel with her team," said Renee Hess, Black Girl Hockey Club Founder and Executive Director. "One of the things she says was that she really wants to be able to be like one of the girls and to be able to go places and be able to stay overnight in the hotel and have the same experience as the rest of her teammates."

Wilkes said the Carolina Hurricanes organization has always made everyone feel welcomed.

"It's amazing," Wilkes said. "That's so inspiring for her. We're lucky that the Canes organization, we've never had any issues as far as racism goes. The Canes organization is so welcoming. They do a lot of outreach. We are very blessed that we have not yet had any problems, I do say yet because I'm not naive enough to think it's never going to happen, but I hope by the time she gets to be an adult it won't be an issue.

"I don't see it as this is a white sport," she added. "I never have. I just think representation definitely matters. The more you see, the better you feel about it. I just want people to know it's OK to love the sport. It's a great sport."