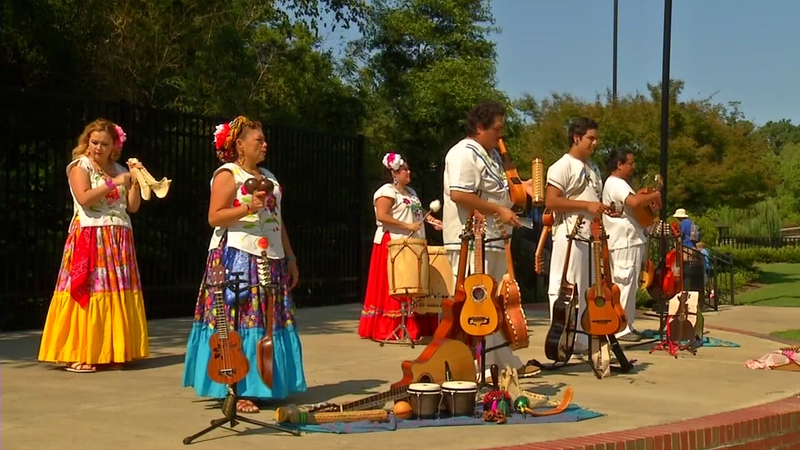 RALEIGH, NC (WTVD) -- La Fiesta del Pueblo, a celebration of all things Latino cultures, is to take over downtown Raleigh later this month.

ABC11 gives you a sneak peek behind one of the musical acts set to take the stage at the event - "Flor y Canto."

"We're a Mexican band. Flor y Canto means flower and song, which actually comes from an ancient language from Mexico, which is the Nahuatl," the band's director, Eduardo Moran. said.

"And the words in Nahuatl are 'in xochitl in cuicatl' and that means like creating art. It's like art in motion, doing something that we can appreciate."

"There was a crisis in the music scene, in the traditional Mexican music, because usually when you hear Mexico, or Mexican traditional music, mariachi comes to your mind but there's so many other genres and kinds of music we create in Mexico, and that's why we created Flor y Canto," Moran said.

Moran said the band prides itself in demonstrating the richness in variety of art across Mexico's many regions, and though most of the band is from the Guerrero region, they look to other parts of the country for inspiration.

"And it's not just about music," Moran said. "We don't just talk about music and do the music, we use traditional instruments as well, so that's another characteristic of the band.

"We try to use some other traditional elements as well, like the clothing, which by the way, is completely hand made by one of our band members, and we're working on some other things, trying to incorporate it in our show."

Check out a list of the band's upcoming events here.

Moran said the band is a family project -- his son, mother, sister, nephew and close family friends are all band members.

"We want to be an example to other families as well, that we are capable of keeping our traditions alive," he said.

"We can do something, not just by attending festivals or events but by getting involved, being involved in these festivals, trying to make people aware of it, trying to set an example for somebody, hopefully.

Check out more information and stories about La Fiesta here.

Donate to El Pueblo's cause here.