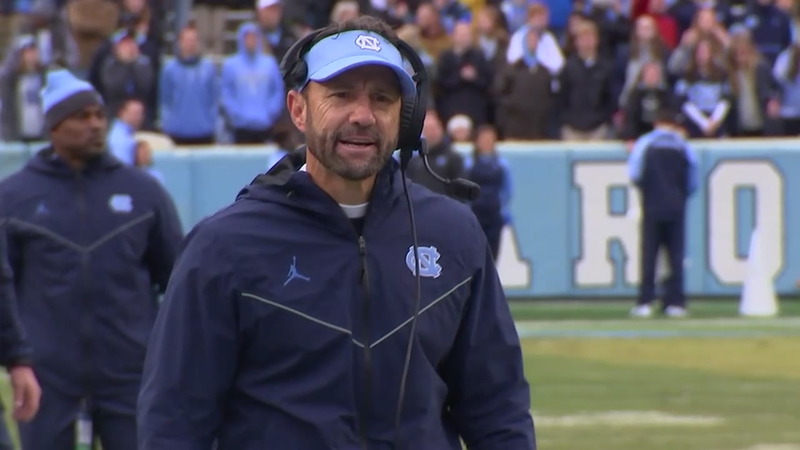 CHAPEL HILL, N.C. (WTVD) -- Larry Fedora will not be the head coach of the University of North Carolina in 2019.

UNC Director of Athletics Bubba Cunningham made the decision not to retain Fedora after meeting with members of UNC's Board of Trustees and Chancellor Carol L. Folt.

"We appreciate all that Larry Fedora has done for us over the last seven years - coming to Carolina in the midst of an NCAA case and bringing stability to our football program when we most needed it,'' Cunningham said. "Despite injuries, despite setbacks and hardships, Larry never made excuses. He focused his teams on overcoming adversity, and I deeply respect the way he persevered and led our program each day with integrity through some tough times. This was not an easy decision because of the deep affinity I have for Larry. It simply is time to take our football program in a new direction."

Fedora is owed $3 million per year for the next four years. Those funds will be paid by the Department of Athletics and not through state funds.

Fedora released the following statement about his time at UNC:

"It has been a great honor to be a part of this incredible University. I am extremely disappointed that I will no longer be UNC's head football coach - I hate that it had to end this way. The last two seasons have been challenging and heartbreaking. The results are not what we wanted and it has been frustrating for everyone involved - coaches, athletes, fans and supporters alike. The results did not reflect the commitment and hard work put in by our players and staff. The players never quit - ever. That speaks to the character of this team and this great University. I wanted the opportunity to fix this. I wanted to make the changes necessary to win again. I also understand this business. I understand that you don't always get the time you want to turn things around. I respect the administration's position and understand their actions. I leave UNC grateful for the opportunity I was given seven years ago. I am thankful I had the chance to work with Chancellor Folt and Bubba Cunningham; I appreciate their leadership and friendship. My family and I will always cherish the time we spent and relationships formed here at UNC and in Chapel Hill."

It was a precipitous fall from grace for Fedora who took the Tar Heels to the ACC Championship Game just 3 short years ago.

Going to the ACC Championship game in 2015 and finishing the season ranked 15th with a record of 11-3 would be the highlight of his time at North Carolina.

He did not fare well against in state competition, going 2-5 against Duke, 3-4 against NCSU, 1-3 against ECU, and 1-1 against Wake Forest.

After Saturday's loss to NCSU, UNC players all spoke of the resolve they unfortunately needed so much of during this bumpy ride. Several were asked if they felt like they were playing for their coach's job. Most said they were playing not just for Fedora but for everyone in the locker room, on the support staff, and in the stands.

It was the same losing recipe again Saturday. An offensively fruitless first half when the defense was standing strong and then an inability to get stops in the second half once the offense kicked into gear.